Kids Encyclopedia Facts
Not to be confused with Manchester Arena.

After 89 years as a railway terminus, it closed to passengers in May 1969. It was renovated as an exhibition centre formerly known as the G-Mex Centre in 1982 and was Manchester's primary music concert venue until the construction of the Manchester Arena. After renovation the venue reverted to its former name Manchester Central in 2007.

The Complex is to become a temporary field hospital for non-critical coronavirus patients, or Fangcang Hospital, part of a network of temporary NHS Nightingale Hospitals. 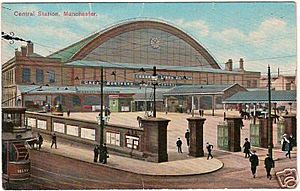 The complex was originally Manchester Central railway station, one of the city's main railway terminals.

Designed by Sir John Fowler, the station was opened in July 1880 by the Cheshire Lines Committee. The station served as the terminus for Midland Railway express trains to London St Pancras. The station's large arched roof – a huge wrought-iron single-span arched roof, spanning 210 feet (64 m), 550 feet (168 m) long and 90 feet (27 m) high – was a noted piece of railway engineering and is the widest unsupported iron arch in Britain after the Barlow train shed at London St Pancras.

At its height, in the 1930s, more than 400 trains passed through the station every day. The station operated for 89 years, before closing in May 1969. 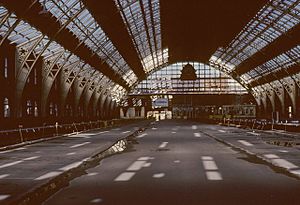 The interior of the derelict station before its renovation in 1982.

In 1978, the structure was acquired by the Greater Manchester County Council to redevelop as a concert venue. In 1982 construction work undertaken by Alfred McAlpine It was the centrepiece of the regeneration plan for the area and wider Castlefield district. The hall covered 10,000 square metres and could be partitioned into various sized units for different exhibitions. Initial construction work concentrated on repairing the derelict structure and re-pointing brickwork which took 18 months. The Greater Manchester Exhibition Centre or G-Mex Centre was opened by Queen Elizabeth II in 1986 after four years of renovation.

In 2001, the Manchester International Convention Centre (MICC) was added, comprising an 804-seat auditorium and breakout rooms and the Great Northern Hall. In 2005, the company running the complex was bought by Manchester City Council. G-Mex was Manchester's primary concert venue from 1986 to 1995. Its position as a concert venue diminished after the opening of the Manchester (then NYNEX) Arena in 1995.

In January 2007 it was renamed Manchester Central, evoking the memory of the former station and converted into an exhibition and conference centre. The building was renovated at a cost of £30 million in 2008 by Manchester-based architects, Stephenson Bell. The first phase to create a foyer took from February to November 2008.

The second phase, completed towards the end of 2009, included an extended foyer to the Grade ll listed Central Hall. The old smoked-glass structure was demolished and replaced by a flat-roofed, clear-glazed structure exposing more of the original architecture. The final phase, completed in September 2010, focused on the rear of the building. New event spaces were built and rooms refurbished to increase the venue's range and size of meeting and banqueting spaces.

During its days as the G-MEX Centre, the venue was used for hosting rock concerts. Not long after its official opening, Factory Records used the venue for their Festival of the Tenth Summer in July 1986 to celebrate the 10th anniversary of Punk in the city, and included appearances by The Smiths, and Factory Records stalwarts New Order. James appeared in 1990, U2 in June 1992, Metallica in November 1992 on their The Black Album tour and The Cure in November 1992. G-Mex had a seating capacity of 9,500 for end stage concerts and 12,500 for standing events and stopped hosting concerts in 1997, with the last gig by Oasis in December. G-Mex was also the 2002 Commonwealth Games venue for gymnastics, weightlifting, judo and wrestling.

After a nine-year break, it was again used for concerts by Snow Patrol in December 2006 with Morrissey, The Verve. Marilyn Manson, Franz Ferdinand, Manic Street Preachers, Arctic Monkeys, Bloc Party and Hard-Fi holding concerts in 2007. Status Quo have performed there multiple times. The venue hosted concerts by Placebo in December 2009, Arcade Fire, Biffy Clyro, Thirty Seconds to Mars, The Taste of Chaos Tour 2010, deadmau5, Pendulum in December 2010 and The Eighth Plague Tour. In 2011, it hosted The Girls' Day Out Show.

In 2009 and 2010, it played host to the Manchester audition stages of the ITV programme The X Factor and in December 2012, the hosted the finals of series 9 of The X Factor.

The venue is also the filming location of Ninja Warrior UK.

Located in the heart of the city, Manchester Central is served by two Metrolink tram stops - Deansgate-Castlefield tram stop and St Peter's Square tram stop both of which are under a five-minute walk from the venue. National Rail local train services serve Deansgate railway station whilst Manchester Piccadilly is a twenty-minute walk away.

All content from Kiddle encyclopedia articles (including the article images and facts) can be freely used under Attribution-ShareAlike license, unless stated otherwise. Cite this article:
Manchester Central Convention Complex Facts for Kids. Kiddle Encyclopedia.