Maranta arundinacea, also known as arrowroot, maranta, West Indian arrowroot, obedience plant, Bermuda arrowroot, araru, araruta, ararao or hulankeeriya, is a large, perennial herb found in rainforest habitats. Arrowroot flour is now produced commercially mostly in St. Vincent and the Grenadines. Arrowroot was one of the earliest plants to be domesticated for food in northern South America, with evidence of exploitation or cultivation of the plant dating back to 8200 BC.

It is widely sold under the guise of Curcuma angustifolia. 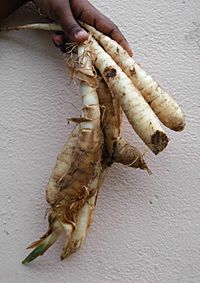 The root of M. arundinacea.

Arrowroot is a perennial plant growing to a height of between 0.3 m (1 ft) and 1.5 m (5 ft). Its leaves are lanceolate. The edible part of the plant is the rhizome. Twin clusters of small white flowers bloom about 90 days after planting. The plant rarely produces seed and reproduction is typically by planting part of a rhizome with a bud. Rhizomes are ready for harvesting 10–12 months after planting as leaves of the plant begin to wilt and die. The rhizomes are fleshy, cylindrical, and grow from 20 cm (8 in) to 45 cm (18 in) long.

The arrowroot plant probably originated in the Amazon rainforest of north-western Brazil and neighboring countries. It grows best between temperatures of 23 °C (73 °F) and 29 °C (84 °F) with annual precipitation between 150 cm (59 in) and 200 cm (79 in). The dormant rhizomes can withstand temperatures as low as 5 °C (41 °F).

In the continental United States, arrowroot is cultivated as an outside plant only in southern Florida.

The Caribbean island nation of St. Vincent and the Grenadines is the world's largest grower of arrowroot and producer of arrowroot flour. In Kerala, India, arrowroot, locally called bilathi koova, is cultivated to produce an easily digestible starch.

Radio-carbon dating has established that M. arundinacea was one of the first plants domesticated in prehistoric South America. Arrowroot, along with leren (Calathea allouia), squash (Cucurbita moschata), and bottle gourd (Lagenaria siceraria) became cultivated plants in northern South American and Panama between 8200 BC and 5600 BC. Some archaeologists believe that arrowroot was first used by Native Americans not as food but as a poultice to extract poison from wounds caused by spears or arrows.

Evidence of the use of arrowroot as food has been found dating from 8200 BC at the San Isidro archaeological site in the upper Cauca River valley of Colombia near the city of Popayán. Starch grains from arrowroot were found on grinding tools. It is unclear whether the arrowroot had been gathered or grown, although the elevation of the site of 1,700 metres (5,600 ft) is probably outside the normal range of elevations at which M. arundinacea grows in the wild. Thus, the plant may have been introduced at San Isidro from nearby lowland rain forest areas in a pioneering effort to cultivate it. Stone hoes for cultivation of plants have been found which date as old as 7700 BCE in the middle Cauca valley, 150 kilometres (93 mi) north of San Isidro.

Domestication of arrowroot at these early dates was probably on a small-scale with gardens of only a few plants being planted in alluvial soils near streams to ensure the steady supply of moisture needed during the growing season by arrowroot and other similar root crops. The exploitation of arrowroot foot was probably complicated by the difficulty of extracting the starch from the fibrous roots. The roots must first be pounded or ground then soaked in water to separate the starch from the fibers. The starch is excellent for digestibility.

Currently arrowroot starch is used in food preparations and confectionery, and for industrial applications such as cosmetics and glue. The residue of starch extraction has a high fibre content and can be fed to livestock.

All content from Kiddle encyclopedia articles (including the article images and facts) can be freely used under Attribution-ShareAlike license, unless stated otherwise. Cite this article:
Maranta arundinacea Facts for Kids. Kiddle Encyclopedia.