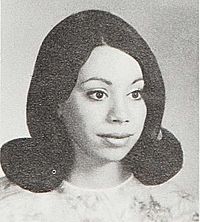 Maria Louise Ewing (March 27, 1950 – January 9, 2022) was an American opera singer. She sung both soprano and mezzo-soprano roles. She was born in Detroit, Michigan.

Ewing made her debut at the Metropolitan Opera in 1976 in Mozart's The Marriage of Figaro. She starred as Carmen, Dorabella in Mozart's Cosi fan tutte, Salome, the title role in L'incoronazione di Poppea, Marie in Berg's Wozzeck and Shostakovich's Lady Macbeth of Mtsensk. She also sang and appeared in Henry Purcell's Dido and Aeneas.

Ewing was married to director Peter Hall. Their daughter is actress Rebecca Hall. Ewing died in Detroit on January 9, 2022, two months before her 72nd birthday.

All content from Kiddle encyclopedia articles (including the article images and facts) can be freely used under Attribution-ShareAlike license, unless stated otherwise. Cite this article:
Maria Ewing Facts for Kids. Kiddle Encyclopedia.