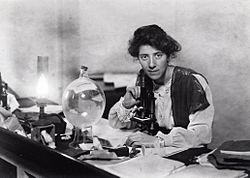 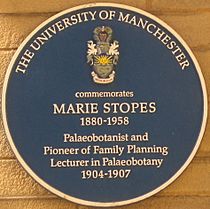 Blue plaque commemorating Marie Stopes at the University of Manchester 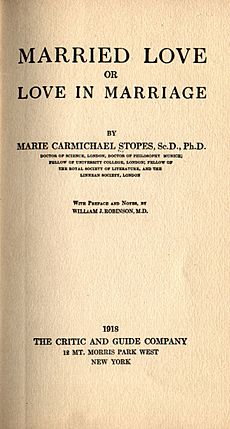 Stopes' newsletter Birth Control News, her book Married Love, and her organisation Marie Stopes International, were hugely important in Britain and throughout the British Empire. She was the founder of British family planning, and fought many battles in print with those whose opinions differed from hers.

Stopes was one of the most highly educated women of her time. Her parents, who were both well educated, kept her away from school until she was twelve. She went to University College London in 1900, and graduated in 1902 with double honours in Botany and Geology. She was awarded a year's scholarship for research.

All content from Kiddle encyclopedia articles (including the article images and facts) can be freely used under Attribution-ShareAlike license, unless stated otherwise. Cite this article:
Marie Stopes Facts for Kids. Kiddle Encyclopedia.