José Martín Cáceres Silva ( born 7 April 1987) is a Uruguayan professional footballer who plays for Italian club Fiorentina and the Uruguay national team. Mainly a central defender, he can also play on either flank, mostly as a right-back.

After starting out at Defensor, he was bought by Spanish club Villarreal in 2007. In the following years he competed in Spain and Italy, notably winning six Serie A titles with Juventus and the 2009 Champions League with Barcelona. He later had a brief spell in England with Southampton before returning to Italy in 2017; despite his ability, his career has been limited by several injuries.

An Uruguay international since the age of 20, Cáceres represented the country in three World Cups, three editions of the Copa América and the 2013 Confederations Cup, winning the 2011 Copa América.

Born in Montevideo, Cáceres started his career with his local team Defensor, becoming a regular at a young age and competing in one full Primera División season with them. In early February 2007, he signed for Spanish club Villarreal, with the deal being made effective in July.

Upon arriving at Villarreal, Cáceres was immediately sent on loan to fellow La Liga side Recreativo, being one of the most used players during the season and often partnering Beto in central defence as the Andalusians managed to retain their division status, finishing in 16th position; on 9 January 2008, he scored against the club that owned his rights in the Copa del Rey (1–0 home win, but 1–2 loss on aggregate), and never appeared officially for them.

Cáceres joined Barcelona on 4 June 2008, with a reported transfer fee of €16.5 million being paid to Villarreal. A buyout clause of €50 million was included in the deal, which ran until June 2012. During his only season at the Camp Nou he featured sparsely, due to both injury and technical decisions.

Even after his recovery, Cáceres only managed to be fourth-choice stopper behind Rafael Márquez, Gerard Piqué and Carles Puyol. He appeared in three games in the campaign's UEFA Champions League – two starts, 217 minutes – being an unused substitute in the final against Manchester United which completed the treble for the Catalans.

On 6 August 2009, Barcelona loaned Cáceres to Juventus in Serie A, with the Turin team having an option to make his stay permanent at the end of the season for €11 million, plus €1 million in variables. He made his debut in a pre-season friendly against former team Villarreal the following day, replacing Jonathan Zebina at right-back at half-time.

The league season began well for Cáceres as he made a goal-scoring debut, netting the opener in a 2–0 away win against Lazio. He began as a regular under Ciro Ferrara, but his campaign would be ultimately disrupted by a number of injuries, including one in January 2010 that put him out of action for several months.

On 30 August 2010, Cáceres returned to Spain and joined Sevilla on a season-long loan, with an option to purchase. He featured regularly for the Gregorio Manzano-led team, especially at right back following the return of Abdoulay Konko to Genoa in January 2011.

On 1 May 2011, Cáceres was severely injured by Michael Jakobsen in a match against Almería, suffering a lacerated kidney following a dangerous challenge. The Dane was given a straight red card, and the South American was initially ruled out for the rest of the campaign, but unexpectedly recovered for the final two games, with his side finishing fifth and qualifying to the UEFA Europa League.

On 31 May 2011, Sevilla agreed a €3 million deal plus €1.5 million in variables with Barcelona for the permanent move of Cáceres to the Ramón Sánchez Pizjuán Stadium. In late January 2012, however, he returned to Juventus on loan. 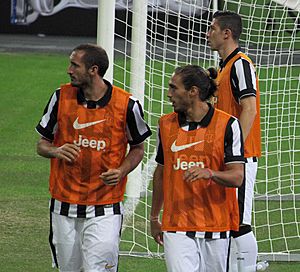 At Juventus, Cáceres chose to wear the number 4 shirt, which had previously belonged to compatriot Paolo Montero. He made his debut for Juve in his second spell on 8 February 2012, playing the full 90 minutes in a 2–1 away win against A.C. Milan in the semi-finals of the Coppa Italia and scoring both of his team's goals. On 25 March he netted his first league goal, heading home an Andrea Pirlo corner kick in the 57th minute of a 2–0 home success over Inter Milan.

On 25 May 2012, Cáceres joined Juventus on a permanent basis, signing a four-year contract. He missed most of the first half of the 2014–15 campaign, after picking up an injury in a 3–2 home win over Roma in October 2014 which sidelined him for three months. He returned to the starting line-up on 11 January 2015, scoring in a 3–1 defeat of Napoli at the Stadio San Paolo. On 8 March, however, he fractured his ankle during a training session, requiring surgery; as a result, he was ruled out indefinitely.

Cáceres returned to the starting line-up on 8 August 2015, in Juventus's 2–0 victory over Lazio in the Supercoppa Italiana. In late September, however, he had his driving license revoked for six months and was suspended by the club after crashing his Ferrari into a bus stop in Turin following a wrong turn. He was alleged to have been over the legal alcohol limit for driving.

Cáceres returned to action on 6 January 2016, starting and playing 84 minutes in a 3–0 home triumph over Hellas Verona. On 4 February, it was confirmed that he would be sidelined for the rest of the season due to the rupture of his right Achilles tendon during the match the day before against Genoa. In May, Juventus' director of football Giuseppe Marotta announced that the player's contract would not be renewed, and that he would be leaving the club on 30 June.

On 16 February 2017, Cáceres joined Premier League club Southampton as a free agent, signing an initial contract lasting until the end of the season. Ten days later he was included in a matchday squad for the first time, remaining an unused substitute in the final of the EFL Cup, a 2–3 loss to Manchester United.

After three months at St Mary's Stadium, Cáceres appeared in his first and only game for Southampton, starting in a 2–1 away win over Middlesbrough on 13 May. He was released on 25 May.

Cáceres returned to Italy in early August 2017, signing for Hellas Verona on a deal running until 30 June 2018. However, it was reported that Lazio had already expressed an interest in acquiring his services, but were ultimately unable to as their quota of two non-EU signings from abroad had already been filled. He joined Verona instead as a result, although rumours circulated in the media linking him with a possible move to Lazio in January as there were no restrictions impeding the transfer of non-EU players between Italian clubs.

On 8 January 2018, Cáceres joined Lazio on a one-year contract with the option for a renewal. He scored his only goal of the campaign on 18 April in a 4–3 away defeat of Fiorentina, featuring sparingly for the fifth-placed team.

On 29 January 2019, Juventus announced the signing of Cáceres on a five-month loan, marking this as his third spell at the club. He made his first appearance since 2016 on 2 February, in a 3–3 home draw against Parma in the domestic league.

Cáceres left Juventus at the end of the season, when his contract with Lazio also expired.

On 30 August 2019, Cáceres joined Fiorentina on a one-year deal with the option for a further season. The following 18 May, he declared that he had tested positive for COVID-19 for 60 days. 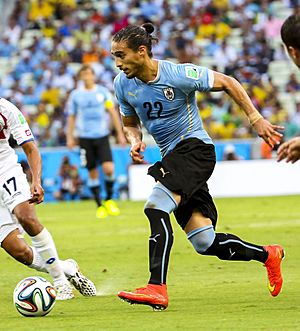 Cáceres in action at the 2014 World Cup

Cáceres played for the Uruguay under-20 team at the 2007 FIFA World Cup held in Canada, appearing in all the matches in an eventual round of 16 exit. Previously, he was named the best defender at the 2007 South American Youth Championship, helping his team to third place.

Cáceres made his debut for the full side on 12 September 2007, in Johannesburg against South Africa. In 2010, he was selected by manager Óscar Tabárez for his list of 23 players for that year's FIFA World Cup, as back-up to Porto's Jorge Fucile at right-back and taking part in the semi-finals against the Netherlands and the third-place match against Germany (both 2–3 losses).

Cáceres scored his first international goal on 23 June 2011, in a 3–0 friendly home win over Estonia. With Fucile not being selected to the 2011 Copa América in Argentina, he played five out of six games during the tournament – as right and left back – with the Charrúas winning their 15th continental tournament. He notably scored the decisive penalty in a penalty shootout victory over the hosts in the quarter-finals.

Cáceres made four appearances for Uruguay in the 2013 FIFA Confederations Cup. In the third-place match against Italy, his penalty was saved by Juventus teammate Gianluigi Buffon as the opposition won the shootout by 3–2 after a 2–2 deadlock following extra time. He was also a member of the squad that took part at the 2014 World Cup, featuring four times in the tournament to help the nation reach the last-16 phase, where they suffered a 2–0 defeat to Colombia at the Maracanã Stadium on 28 June.

Due to an ankle injury suffered in March 2015, Cáceres was excluded from the 2015 Copa América squad. A serious Achilles tendon ailment in February 2016 also prevented his participation in the Copa América Centenario the following summer.

Cáceres was included in Uruguay's final 23-man squad for the 2018 World Cup in Russia. He played all the matches and minutes in a quarter-final exit.

In March 2019, Tabárez named Cáceres in the squad for the 2019 Copa América in Brazil. On 16 June, he provided the assist to Luis Suárez's goal in a 4–0 win over Ecuador in the team's opening group match of the tournament. He appeared four times in total throughout the tournament, including the quarter-final tie against Peru in which his team were eliminated from the competition after losing 5–4 on penalties, following a 0–0 draw after regulation time.

Cáceres's primary position is that of a central defender, but he can also operate as a left or right back, being noted for his pace, strength, tackling and aerial ability. He has also been deployed as a wing-back or winger, on either side of the pitch.

During his time with Juventus, Cáceres' tenacious approach drew comparisons to compatriot Montero, who also played there.

All content from Kiddle encyclopedia articles (including the article images and facts) can be freely used under Attribution-ShareAlike license, unless stated otherwise. Cite this article:
Martín Cáceres Facts for Kids. Kiddle Encyclopedia.