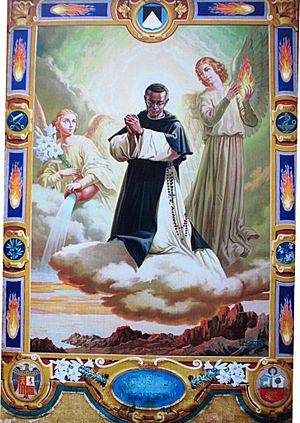 Saint Martin de Porres (December 9, 1579 – November 3, 1639) is a Christian Saint of Dominican Order. He is the patron saint of social justice. He is also the patron saint of race relations, African-Americans, barbers and hairdressers. He was born in Lima, Peru where he is venerated in the large basilica of Santo Domingo. On his feast day, November 3rd, many churches have a ceremony.

All content from Kiddle encyclopedia articles (including the article images and facts) can be freely used under Attribution-ShareAlike license, unless stated otherwise. Cite this article:
Martin de Porres Facts for Kids. Kiddle Encyclopedia.