There were 472 households out of which 38.8% had children under the age of 18 living with them, 69.5% were married couples living together, 5.9% had a female householder with no husband present, and 22.5% were non-families. 18.6% of all households were made up of individuals and 6.4% had someone living alone who was 65 years of age or older. The average household size was 2.86 and the average family size was 3.30.

Some of Melissa's first settlers came from the old Highlands community, two and a half miles north of present-day Melissa. C.H. Wysong was one of the earliest settlers. A post office was established in 1853. The Houston and Texas Central Railroad was built in Melissa in 1872. The town was laid out at this time. The railroad encouraged many families to come to Melissa. The town is believed to have been named for the daughter of a railroad executive, George A. Quinlan (1838–1901) of the Houston and Texas Central Railroad. There is some disagreement about this, as others argue that the town was named after Melissa Huntington, daughter of C. P. Huntington, another well-known railroad executive. Anna, Texas, is named after Anna Elizabeth Quinlan (1878–1952), the only daughter of George Austin Quinlan and his wife Mary Kate Saunders (1851–1884). Quinlan, Texas, is named after George Austin Quinlan himself. 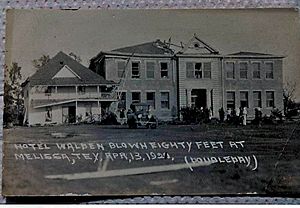 The first school in Melissa was built on land purchased in 1882 by trustees James Graves, John Gibson, and George Fitzhugh, who were early settlers of the area. The first teacher was Mary Huckerston, who taught there for five years. The school began with 38 pupils. Church services were held there for all faiths on Sundays. A two-story brick schoolhouse was built on this site in 1910 to accommodate growth brought by the railroad.

Melissa was an important shipping point in the early 1900s. Corn, wheat, alfalfa hay, wood, and livestock were all sent out on the railroad.

A deadly tornado struck Melissa on April 13, 1921, killing 13 people and injuring many more. The tornado tore the roof off of the brick school building, but the children inside were not seriously injured. However, all churches in the town, three cotton gins, every business house except a bank, the post office, and the Houston and Texas Central railway station, were wrecked by the twister. The Waldon Hotel was lifted by the winds, turned halfway around, and thrown up against the school building.

Pioneers who settled in or near Melissa

All content from Kiddle encyclopedia articles (including the article images and facts) can be freely used under Attribution-ShareAlike license, unless stated otherwise. Cite this article:
Melissa, Texas Facts for Kids. Kiddle Encyclopedia.