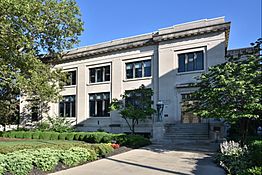 The Miami Conservancy District is a river management agency operating in Southwest Ohio to control flooding of the Great Miami River and its tributaries. It was organized in 1915 following the catastrophic Great Dayton Flood of the Great Miami River in March 1913, which hit Dayton, Ohio particularly hard. Designed by Arthur Ernest Morgan, the Miami Conservancy District built levees, straightened the river channel throughout the Miami Valley, and built five dry dams on various tributaries to control flooding. The district and its projects are unusual in that they were funded almost entirely by local tax initiatives, unlike similar projects elsewhere which were funded by the federal government and coordinated by the U.S. Army Corps of Engineers.

The 1913 flood has been ascribed in part to the 1912 eruption of Mount Katmai and its daughter volcano Novarupta in Alaska. In one of the greatest recorded volcanic events, Novarupta emitted enough fine ash into the atmosphere to block sunlight and cool the climate of the Northern Hemisphere that winter.

The success of the Miami Conservancy District helped to inspire the development of the much larger Tennessee Valley Authority during the Great Depression.

The Miami Conservancy District (MCD) actively promotes and develops recreational amenities throughout the Great Miami River Watershed. MCD owns and/or maintains an extensive recreation trail system (nearly 34 miles) throughout Montgomery County. The trail system is part of a network of 340 miles of multi-use, paved path that connect Dayton east to Xenia and near Chillicothe and London, south to Franklin, west to near Greenville, and north to Piqua.

Low dams: MCD owns three low dams. Only Two-mile Dam in Hamilton is part of the flood protection system. The other low dams create a pool of water upstream of each dam for recreation, including boating and fishing. The cities of Hamilton, West Carrollton, and Moraine, pay an assessment for MCD to maintain the recreational dams.

RiverWalk: The Dayton RiverWalk runs along the levee-top between the Main Street Bridge and the Monument Avenue (Dayton View) Bridge on each side of the Great Miami River. The total length of the lighted, crushed gravel walkway loop, including the two bridges, is about 1 mile. The walkway is easily accessible from the end of either bridge.

All of these projects were constructed and are maintained by funds separate from flood protection or groundwater assessments. Assessments to cities – as well as grants and other revenue sources – pay for the construction and maintenance of MCD recreation amenities.

All content from Kiddle encyclopedia articles (including the article images and facts) can be freely used under Attribution-ShareAlike license, unless stated otherwise. Cite this article:
Miami Conservancy District Facts for Kids. Kiddle Encyclopedia.