Fairborn is a city in Greene County, Ohio, United States, near Dayton and Wright-Patterson Air Force Base. The population was 32,352 at the 2010 census. It is the only city in the world with the name of Fairborn, a portmanteau word created from the names Fairfield and Osborn; the two villages that merged in 1950 after the Great Dayton Flood of 1913 forced Osborn to move out of a flood plain and alongside Fairfield.

Fairborn is the home of Wright State University, which serves nearly 20,000 undergraduate and graduate students. Fairborn is served by a branch of the Greene County Public Library[1]. It is part of the Dayton Metropolitan Statistical Area. The city is also home to the disaster training facility known as Calamityville.

Fairborn was formed from the union of the two villages of Fairfield and Osborn. Fairfield was founded in 1816 and Osborn in 1850.

Before European settlers arrived, native inhabitants of the region included the Adena culture of Ohio and nearby states, and the subsequent Hopewell culture known from Illinois to Ohio and renowned for their geometric earthworks. Several surviving examples of earthen mounds made by Mound builders still exist at the Wright Brother's Memorial atop the bluff overlooking Huffman Prairie, and another lies on the grounds of the base.

The area of the village of Fairfield was settled before Ohio was a state. The first log cabin was built by George Greiner in 1799. The area where the village would grow was favorable to pioneers who were moving northward and westward from Kentucky and Virginia. Often there were raids made upon the settlement by local Indians, followed by similar raids on local native settlements. Although no massacres took place, both sides engaged in taking prisoners. There are two accounts regarding the name "Fairfield". One more accepted account claims that a local Native American - possibly a Shawnee - tribal chief, in speaking to one of the town's leaders after making peace and exchanging prisoners, said to William Cozad that when he looked out from Reed's Hill over the town,

The other possible source for the name is after a Fairfield in England.

Osborn was a town (no longer existing) located near the Haddix Road-Ohio 235 intersection at the northern edge of Wright-Patterson Air Force Base in what is now the flood-prone basin of the Huffman Dam in the U.S. state of Ohio. Osborn was named after the superintendent of the railroad named E.F. Osborn. The previously unnamed town allowed the railroad to be built through it after the nearby town of Fairfield refused the plan of the railway to go through there. Many of the original houses of old Osborn still stand in Fairborn's Historic Osborn District.

Huffman Prairie, part of Dayton Aviation Heritage National Historical Park, is an 84-acre (.34 km²) patch of rough pasture that was outside the village of Fairfield (now known as Huffman Prairie Flying Field), where the Wright Brothers undertook the difficult and sometimes dangerous task of creating a dependable, fully controllable airplane and training themselves to be pilots. After they began making use of Huffman Prairie in 1904, the Wright brothers made hundreds of flights here after developing the 1905 Wright Flyer III (the plane they considered to be the first practical airplane), testing the aircraft built by the Wright Company. At the Wright Flying School, also located here, they trained more than a hundred pilots, including the flyers for the Wright Exhibition Team and the first military flyers, including Henry H. Arnold and Thomas DeWitt Milling. The United States Army Signal Corps purchased the field in 1917 and renamed it, along with 2,000 acres (8.1 km2) adjacent (8 km²), Wilbur Wright Field. In 1948 the area was merged with nearby Patterson Field and became Wright-Patterson Air Force Base.

In 1921 nearly the entire town of Osborn, along with the railroad (now Norfolk Southern Railway), were relocated two miles away during construction of the Huffman Dam on the Mad River to a site east of and adjacent to Fairfield. This was necessary because of the Miami Valley Flood Control Project and the Miami Conservancy District that was begun after the Great Dayton Flood (Dayton, Ohio) of March, 1913. The village decided to move homes out of the flood plain on flatbed trucks and settle alongside Fairfield.

Growth of the two villages was hindered by the other's borders, a military flying field and depot (now Wright-Patterson Air Force Base), township borders, and county borders. The two villages voted to merge in 1949 and officially merged in 1950 The first business to depict the name of the new city was the large vertical sign of the Fairborn Theatre. 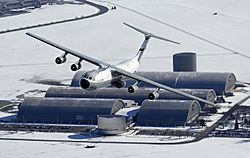 From 1950-1970 the city experienced explosive growth to six times its former population, surpassing Xenia (the county seat) as the most populous city in the county, due largely to the local employment opportunities made available by the nearby Air Force Base. Another employer, Southwestern Portland Cement, operated the largest factory in the city during this period, mining the locally exposed Brassfield Formation.

The development of Interstate 675 (Ohio) began in the 1960s to serve as an eastern bypass of Dayton. In the early 1970s, construction began on the northernmost part of I-675, just east of Fairborn. The first segment terminated at N. Fairfield Road (exit 17). No further construction was done for over a decade and it was jokingly referred to by some as "Fairborn's private Interstate". Dayton Mayor James H. McGee opposed the highway, contending it would draw economic development out of the city into the suburbs. I-675 was eventually completed by 1987.

Fairborn's growth slowed significantly in the 1970s and has only resumed at a moderate pace since the late 1980s. It has since been surpassed by neighboring Beavercreek, Ohio in population.

As of 2007, Fairborn is a quiet town with many still working at the nearby Wright Patterson Air Force Base, the home of the Air Force Materiel Command and in many measures the largest, most diverse and organizationally complex base in the Air Force.

Many also work at or attend Wright State University, a university that became independent in 1967. From a small cluster of buildings it has grown into a major campus with almost 20,000 students. Though Wright State has a Dayton, Ohio address it is legally within Fairborn jurisdiction and has police officers deputized by the Fairborn police department.

Fairborn hosts its annual Sweet Corn Festival every August and the USAF marathon every September. It also prides itself on its annual 4th of July Parade. Fairborn is also home of the Fairborn Wee Hawks Pee Wee Football teams. [2]

There were 14,306 households of which 26.3% had children under the age of 18 living with them, 36.7% were married couples living together, 14.4% had a female householder with no husband present, 4.8% had a male householder with no wife present, and 44.1% were non-families. 32.7% of all households were made up of individuals and 8.8% had someone living alone who was 65 years of age or older. The average household size was 2.24 and the average family size was 2.85.

There were 13,615 households out of which 26.7% had children under the age of 18 living with them, 42.8% were married couples living together, 12.4% had a female householder with no husband present, and 41.1% were non-families. 31.0% of all households were made up of individuals and 8.3% had someone living alone who was 65 years of age or older. The average household size was 2.28 and the average family size was 2.86.

All content from Kiddle encyclopedia articles (including the article images and facts) can be freely used under Attribution-ShareAlike license, unless stated otherwise. Cite this article:
Fairborn, Ohio Facts for Kids. Kiddle Encyclopedia.