Kids Encyclopedia Facts
Not to be confused with Mike Monroe. 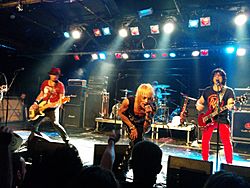 Michael Monroe & band performing in Barcelona at Sala Razzmatazz 2 in May 2014 in Barcelona, Catalonia, Spain 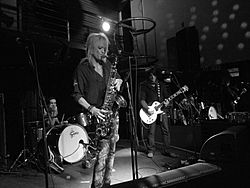 Michael Monroe performing with his band in 2010 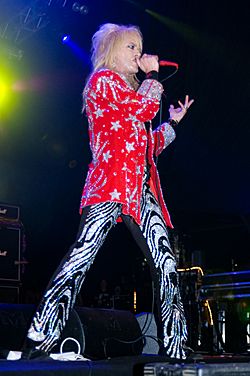 Michael Monroe of Hanoi Rocks performing at the Ilosaarirock festival on the 2008 in Joensuu, Finland 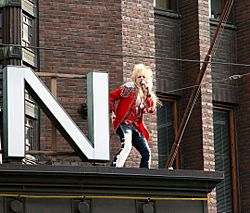 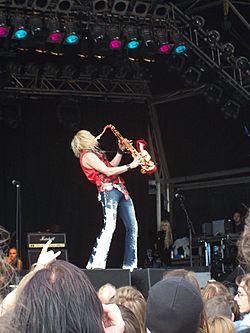 Michael Monroe of Hanoi Rocks, playing the saxophone on stage at the Scarborough Rock in the Castle festival

Matti Antero Kristian Fagerholm (born 17 June 1962), better known by his stage name, Michael Monroe, is a Finnish rock musician and multi-instrumentalist who rose to fame as the vocalist for the glam punk band Hanoi Rocks, and has served as the frontman for all-star side projects, such as Demolition 23 and Jerusalem Slim (with Steve Stevens).

All content from Kiddle encyclopedia articles (including the article images and facts) can be freely used under Attribution-ShareAlike license, unless stated otherwise. Cite this article:
Michael Monroe Facts for Kids. Kiddle Encyclopedia.