Midway High Lakes Area, also known as High Lakes Area is a United States Forest Service designated area located in Washington’s Cascade Mountains. It lies on a high plateau on Mount Adams' northwestern flank. It is between the Goat Rocks on the north and Mount Hood to the south and contains Takhlakh Lake along with several other lakes. The area offers five scenic high elevation lakes all within a seven mile radius. It is administered by the Gifford Pinchot National Forest. While even the most visited areas at Mount Adams pale in comparison to nearby St. Helens or Rainier, it is by its own standards one of the most popular recreational areas around Mount Adams. Some of the lakes offers photogenic views of Mount Adams from across the lake. 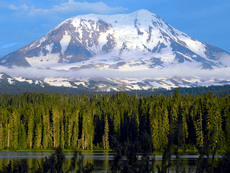 Adams Glacier cascades down the northwest face of Mount Adams in a series of icefalls, viewed from Takhlakh Lake. 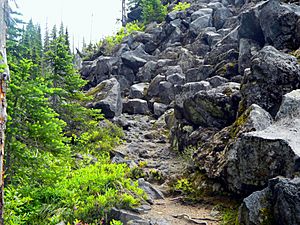 The Midway High Lakes Area lies below the volcanic peak of 12,276 feet (3,742 m) Mount Adams, and Adams Glacier cascading from the summit in a series of icefalls. It is the second largest glacier in the State of Washington, after Carbon Glacier on Mount Rainier. The area is characterized by several volcanic features in addition to Mount Adams, such as the Takh Takh Lava Flow, the Muddy Fork Lava Flows, and Potato Hill, a small 200 foot tall cinder cone below the Muddy Fork Lava Flows. There are some meadows and marshes, with Takh Takh Meadows being the most well known. Muddy Meadows is another named meadow in the High Lakes Area, near Riley Horse Camp and Muddy Meadows Trail accessing the Pacific Crest Trail and the Mount Adams Wilderness.

The table below lists the five major lakes within the Midway High Lakes Area. 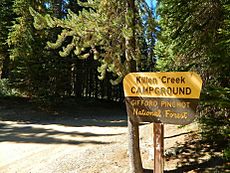 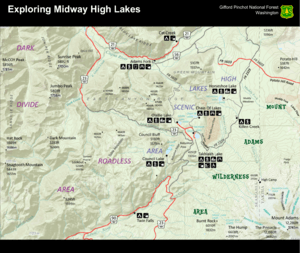 All content from Kiddle encyclopedia articles (including the article images and facts) can be freely used under Attribution-ShareAlike license, unless stated otherwise. Cite this article:
Midway High Lakes Area Facts for Kids. Kiddle Encyclopedia.