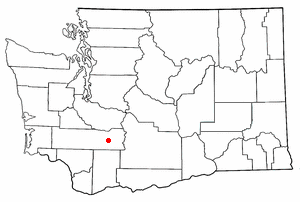 Randle is an unincorporated community in extreme eastern Lewis County, Washington, United States. Randle is located on U.S. Route 12 and is notable as the northeastern access point to the Mount St. Helens Windy Ridge viewpoint, by way of forest service roads that cut through the Gifford Pinchot National Forest. Randle is located right next to the Cowlitz River and is about four miles north of the Cispus River, a tributary of the Cowlitz. The rural area surrounding Randle is known locally as the "Big Bottom Valley," which is reflective of the fact that the valley floor in which the Cowlitz River winds westward through Randle is "big"—flat, fertile land that is at places more than 3 miles wide.

William Joerk explored in the area around 1882. Randle was first settled in 1886 by James L. Randle. The townsite was founded in 1902.

Randle is the center of the White Pass School District, which, in addition to Randle, covers the small towns of Glenoma, Washington, and Packwood, Washington (its school district jurisdiction includes a vast rural expanse in extreme eastern Lewis County, terminating at the Cascade Mountains and the county border with Yakima County). The community of Randle is located within Census Tract 9719 of Lewis County.

This region experiences warm (but not hot) and dry summers, with no average monthly temperatures above 71.6 °F. According to the Köppen climate classification system, Randle has a warm-summer Mediterranean climate, abbreviated "Csb" on climate maps.

All content from Kiddle encyclopedia articles (including the article images and facts) can be freely used under Attribution-ShareAlike license, unless stated otherwise. Cite this article:
Randle, Washington Facts for Kids. Kiddle Encyclopedia.