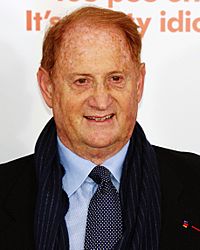 Medavoy was born in the Chinese city of Shanghai. His parents were Russian Jews. He lived in Chile from 1947 to 1957. He became an American citizen in 1963. He has been married four times. He has two children, including Brian Medavoy.

All content from Kiddle encyclopedia articles (including the article images and facts) can be freely used under Attribution-ShareAlike license, unless stated otherwise. Cite this article:
Mike Medavoy Facts for Kids. Kiddle Encyclopedia.