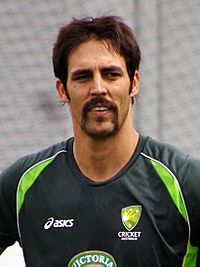 Mitchell Guy Johnson (born 2 November 1981) is an Australian former cricketer. He was a left-handed batsman and a left-handed fast bowler. He has been awarded the International Cricket Council's Sir Garfield Sobers Trophy twice (2009 and 2014). He famously took part in the Australian Test squad during the 2013–14 Ashes series. His country won the series 5–0. Johnson also won the player of the series award for taking 37 wickets in a dominant showing against the English batsmen. During his Test career, he played 73 matches and took 313 wickets from 16,001 balls bowled. He retired from all forms of cricket in 2018.

Johnson was born in Townsville, Queensland. Although he bats and bowls left-handed, Johnson writes with his right hand. In 2016, he published his autobiography Resilient.

All content from Kiddle encyclopedia articles (including the article images and facts) can be freely used under Attribution-ShareAlike license, unless stated otherwise. Cite this article:
Mitchell Johnson (cricketer) Facts for Kids. Kiddle Encyclopedia.