Mitchell Aaron Starc (born 30 January 1990) is an Australian international cricketer who plays for the Australian national team and New South Wales in domestic cricket. He is a left-arm fast bowler and a capable lower order left-handed batsman. He was a prominent member of the victorious Australian squad that won the 2015 Cricket World Cup and was declared Player of the Tournament as a result of his consistent performances. With 49 World Cup wickets, he is the joint 5th highest wicket taker in tournament's history.

On 15 November 2015, Starc delivered one of the fastest deliveries in a Test match, of 160.4 km/h against Ross Taylor of New Zealand. Starc then became the fastest bowler to take (over) 100 ODI wickets on 21 August 2016 against Sri Lanka, doing so in 52 innings and breaking Saqlain Mushtaq's 19-year-old record of taking 100 wickets in 53 innings. However, just 19 months later on 25 March 2018, Starc had his record broken by Rashid Khan, who took 100 wickets in only 44 innings. As of February 2019, Starc nevertheless remains the fastest paceman to achieve the feat.

On 30 December 2016, against Pakistan in the Boxing Day Test, he broke Andrew Symonds' record of the most sixes at the MCG in one innings, hitting 7 sixes.

In November 2017, he became the first bowler to take a hat-trick in each innings of a Sheffield Shield match, while playing for New South Wales against Western Australia in the 2017–18 Sheffield Shield season. 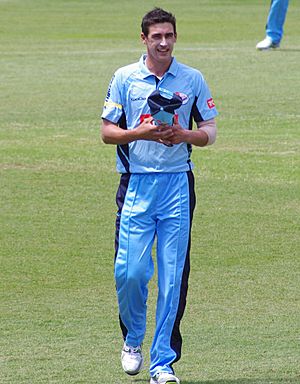 Starc started playing cricket from a young age, at 19 years old for Northern Districts as a wicket keeper. He was a representative cricketer of the Northern Districts Cricket Association (NDCA) and attended Homebush Boys High School, representing the school's 1st grade cricket team. He is also a former junior cricketer for the Berala Sports Cricket Club in Sydney, where he was known to wicket keep and bowl in the same innings.

Starc debuted for his home state New South Wales in 2009, at the age of 19. His performances for Western Suburbs and the state 2nd XI earned him the elevation and he replaced the suspended Aaron Bird for the final match of the season. Starc gained a spot at the Centre of Excellence in the off-season in 2009. In eight Sheffield Shield games in the 2009–10 season, he made a half-century and took 21 wickets, including a best of 5 for 74 against Queensland.

In 2019, Starc maintained his dominance at the international level by breaking records in the Australian domestic one-day tournament, which came about due to postponement of Australia's tour of Bangladesh. The pure numbers from Starc's tournament underlined his dominance: 26 wickets from six matches at an average of 8.12 and a strike rate of 12.3. Starc was named as Player of the Tournament in the tournament in which New South Wales won.

For his performances in 2012, he was named in the Cricinfo CLT20 XI.

In the 2014 Indian Premier League (IPL), he was bought by Royal Challengers Bangalore and quickly became their key bowler in the IPL 2015 edition. After missing the beginning of the tournament with injury, he came back and continued on with his good form from the World Cup. For his performances in 2015, he was named in the Cricinfo IPL XI for the season.

Having also missed the 2016 edition of IPL, in February 2017, Starc parted ways with Royal Challengers Bangalore in order to focus on international cricket, for which Royal Challengers Bangalore got an addition of 5 crore to their purse at the 2017 IPL auction. On 27 January 2018, in the 2018 IPL auction he was bought for ₹9.4 crore by Kolkata Knight Riders (KKR). On 30 March, Starc was ruled out of the 2018 IPL season due to injury. He was released from KKR on 14 November 2018.

Starc, along with many other Australian bowlers including Pat Cummins didn't enroll for the IPL 2019 Auction to focus on the Cricket World Cup 2019 that was about to follow.

After a series of injuries to several senior Australian fast bowlers, Starc was a late replacement in the team to tour India in late 2010, replacing Josh Hazlewood. Later, after Doug Bollinger was injured following the first Test, Starc and fellow uncapped young pacemen Peter George and James Pattinson were left competing for a place. George was selected and after Pattinson was injured, Starc would earn his first international call-up and made his One Day International (ODI) debut against India in Visakhapatnam in October 2010. He did not bat and was wicketless.

Starc made his Test debut for Australia on 1 December 2011, in the first Test of the two-Test series against New Zealand in Brisbane. He took two wickets in the match and another two in the second Test in Hobart. He was left out of the squad named for the first Test of the subsequent series against India, but was recalled for the third Test on the pace-friendly WACA Ground in place of spinner Nathan Lyon, taking four wickets. In the Test series in India in 2012–13, he fell just one run short of a maiden Test ton. During the third Test of the 2012–13 Border-Gavaskar Trophy series in India, Starc became the first No. 9, 10 or 11 batsman to survive 100 balls in both innings.

Starc was selected to play in the third Test of South Africa's tour of Australia in 2012–13. Whilst Australia lost the match, Starc took 6/154 and achieved the second fastest Test fifty (32 balls) by an Australian in Australia's second innings on 4 December. Despite his recent form, he was rested in favour of Jackson Bird to make his debut for the Boxing Day Test against Sri Lanka. They would both be selected for the Sydney Test a week later.

Starc received the Man of the Tournament award in the 2015 Cricket World Cup, which Australia won, defeating New Zealand in the final. In the league stage match between Australia and New Zealand, Starc gave his best performance in ODIs of 6/28 as a reply to Trent Boult's 5/27 which left Australia defending a meagre score of 151, which New Zealand eventually scored and thus won by 1 wicket. He also became Australia's leading wicket-taker across all forms of first-class and international cricket for the 2014–15 season with 60 wickets, including the leading wicket-taker for 2015 Cricket World Cup (22 wickets at an average of 10.0 and an economy rate of 3.5), having played one fewer game than New Zealander Trent Boult. Starc was adjudged Man of the Tournament in the 2015 Cricket World Cup. He was also the leading wicket-taker in the world in all forms of international cricket for the 2015 calendar year with 87 after his ankle injury in the inaugural day/night Test at the Adelaide Oval.

In the second Test match of Australia's 2016 away tour of Sri Lanka, Starc took his 100th Test wicket. For his performances in 2016, he was named in the World Test XI by the ICC and Cricinfo. He won the 2017 Allan Border Medal for the best Test bowler for his performance with the ball against Sri Lanka in 2016. He reached 1,000 Test runs in Pune in the 2016–17 Border–Gavaskar Trophy series against India. With this he became the 14th Australian cricketer to take more than 100 wickets and score more than 1,000 runs in Test cricket. In the first Test match of Australia's 2018 away tour of South Africa, he took bowling figures of 9 for 109 and won the Man of the Match award.

In April 2018, he was awarded a national contract by Cricket Australia for the 2018–19 season. He took 13 wickets in the 2018–19 Border–Gavaskar Trophy series against India and in the following Test series against Sri Lanka, he was instrumental in setting up Australia's series clinching win with his 10-wicket haul.

In April 2019, he was named in Australia's squad for the 2019 Cricket World Cup. In Australia's match against the West Indies, Starc became the quickest bowler, in terms of number of matches, to take 150 wickets in ODIs, doing so in his 77th game, thus achieving this feat one match quicker than Saqlain Mushtaq, who did it in 78 games. Australia went on to win the match by 15 runs with Starc finishing on 5/44 in his 10 overs. On 29 June 2019, in the match against New Zealand, Starc became the first bowler to take three five-wicket hauls at the Cricket World Cup. He finished the tournament with 27 dismissals, which is an all-time record for most wickets as an individual in a single World Cup.

In July 2019, he was named in Australia's squad for the 2019 Ashes series in England. Although, he just played a solitary game in the Ashes, taking 4 wickets across two innings, as Australia chose to rotate their fast bowlers over the course of the series. On 16 July 2020, Starc was named in a 26-man preliminary squad of players to begin training ahead of a possible tour to England following the COVID-19 pandemic. On 14 August 2020, Cricket Australia confirmed that the fixtures would be taking place, with Starc included in the touring party.

In November 2020, Starc was nominated for the ICC Men's ODI Cricketer of the Decade award. The following month, in the second Test against India, Starc took his 250th wicket in Test cricket.

Starc is of Slovene descent. He is the older brother of Australian Olympic high jumper Brandon Starc.

In 2015, Starc became engaged to fellow Australian cricketer Alyssa Healy and they married on 15 April 2016. Starc and Healy are only the third married couple to both play Test cricket, after Roger and Ruth Prideaux, who represented England in the 1950s and 1960s, as well as Guy and Rasanjali de Alwis, who represented Sri Lanka in the 1980s and 1990s. They met when they were 9, when both were wicketkeepers for Northern Districts. In March 2020, Starc flew home ahead of the final ODI match against South Africa, so he could watch Healy play in the final of the 2020 ICC Women's T20 World Cup.

All content from Kiddle encyclopedia articles (including the article images and facts) can be freely used under Attribution-ShareAlike license, unless stated otherwise. Cite this article:
Mitchell Starc Facts for Kids. Kiddle Encyclopedia.