Montgomery is a city in Le Sueur County, Minnesota, in the United States, 45 miles south of Minneapolis. It was named after Richard Montgomery, an Irish-American soldier who served as a major general in the Continental Army during the Revolutionary War. The population was 2,956 at the 2010 census.

Montgomery as platted in 1877 when the railroad was extended to that point. 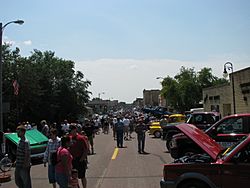 Montgomery celebrates its Czechoslovakian heritage annually at the end of July with one of Minnesota's oldest festivals, Kolacky Days. The festival dates back to 1929, when an estimated 6,000 people visited Montgomery for the first Kolacky Day celebration, held on October 1.

"The Kolacky Day spirit reigned supreme from early Tuesday morning until a comparatively late hour Wednesday morning. More than 1,600 of the celebrated delicacies were devoured," according to a Montgomery Messenger account from the following week.

Events at the first celebration included a trap shooting tournament, a parade, sports and races, and a football game between Montgomery and Le Sueur Center (now Le Center).

In 1931 Miss Leatta Ehmke (later Leatta Trnka) was crowned the first Kolacky Queen by Mayor Henry Westerman. For the 1934 celebration, a novelty button, sold by the Kolacky girls, was devised and is still in use today. Following the attack on Pearl Harbor on December 7, 1941, Kolacky Day retreated to the background until the Montgomery Community Club revived the celebration in 1948. Kolacky Day officially became a summer festival in 1966 when the traditional date, the last Sunday in September, was dropped in favor of the first weekend in August. The earlier date and warmer weather brought huge crowds to the festival. In 1975, Kolacky Day became Kolacky Days and the event was held for the first time at the end of July. It is now celebrated on the fourth full weekend of that month. The shift was made at the urging of the Green Giant vegetable canning company, to avoid conflict with the busy corn-processing season.

Other annual events include the Torchlight Parade & Fireworks, the Masopust Festival also known as "The Czech Mardi Gras" and the Miss Czech-Slovak MN Pageant.

Montgomery's baseball tradition includes the amateur baseball team, known as the Mallards, the former high school Montgomery-Lonsdale Redbirds and now the Tri-City United Titans. The Mallards play in the Dakota Rice Scott Amateur Baseball League (DRS) under the direction of the Minnesota Baseball Association. The Mallards participated in the State Tournament in 1998, 1999, and 2002. They play their home games at Memorial Field, in Memorial Park.

The Redbirds played in the Minnesota River Conference under the direction of the Minnesota High School League. The Redbirds participated in a few State Tournaments and won the Class A State Championship for the 1998-1999 Season. Now the tradition continues with the consolidated Tri-City United School District.

The Tri-City United Community Education Office provides the citizens of Montgomery as well as the rest of the school district with recreational opportunities for all ages. 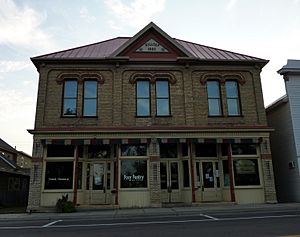 Hilltop Hall is listed on the National Register of Historic Places.

According to the United States Census Bureau, the city has a total area of 2.62 square miles (6.79 km2), all of it land.

Minnesota State Highways 13 and 21 are two of the main routes in the city.

Minnesota State Highway 99 is located directly to the South.

Montgomery is 15 miles from Interstate 35.

The closest towns to Montgomery are:

The closest major city is Faribault to the Southeast.

There were 1,185 households of which 33.5% had children under the age of 18 living with them, 47.4% were married couples living together, 10.5% had a female householder with no husband present, 6.2% had a male householder with no wife present, and 35.9% were non-families. 30.3% of all households were made up of individuals and 11.4% had someone living alone who was 65 years of age or older. The average household size was 2.49 and the average family size was 3.07.

All content from Kiddle encyclopedia articles (including the article images and facts) can be freely used under Attribution-ShareAlike license, unless stated otherwise. Cite this article:
Montgomery, Minnesota Facts for Kids. Kiddle Encyclopedia.