New Prague ( prayg) is a city in Scott and Le Sueur counties in the state of Minnesota. The population was 7,321 at the 2010 census.

New Prague was laid out in 1856, and named after Prague, the capital of Bohemia (now the Czech Republic). New Prague was originally built up chiefly by Czechs.

At the advice of Catholic Bishop Rev. Joseph Cretin, Anton Philipp, a native German, first settled within the present limits of New Prague. In 1856 Philipp purchased 160 acres in Helena Township, Scott County. Philipp did not make an official plat of the town but began selling lots that same year, marking the beginning of New Prague. Several Bohemian families came to the area shortly after Philipp arrived.

New Prague’s early development was not spectacular for a variety of reasons. First, during the Civil War years, 1861-1865, European immigration almost stopped as European immigrants were naturally wary of the U.S. Civil War. Second, located in the middle of the Big Woods, the enormous challenge of clearing fields proceeded at a slow pace.

One of the most important developments in the new village occurred in 1877 when the Minneapolis & St. Louis Railway (M & St. L) reached New Prague. The arrival of the railroad era expedited agriculture as New Prague’s most important industry. A link with the outside world enabled farmers to send their commodities to markets and created a conduit to bring inventory to the village’s businesses. Just four years after the M & St. L reached New Prague, the first grain elevator and flour mill were completed, marking the beginning of New Prague earning its nickname, the “Flour City.”

Czech immigration to the United States reached its peak during the 1880s with 62,000 coming to the U. S. during this decade. Along with Montgomery, which is approximately eight miles south of New Prague, New Prague was becoming the center of “The Bohemian Triangle” of Minnesota covering parts of Scott, Le Sueur and Rice counties, which are neighboring counties. Through the decades since 1856, Le Sueur County has had more Bohemians than any other county in the state.

The village’s name was changed from Prague to New Prague on February 25, 1884.

The 1890s were probably New Prague’s heyday decade. The town was becoming a major market for farm produce and was providing goods and services for growing numbers of farmers and villagers for miles around. Streets were being graded and wooden sidewalks built along the streets. New Prague was incorporated as a city on April 4, 1891. New Prague Flouring Milling Company completed its mill in 1895. Electric lights were installed in the city in 1895, and telephone lines were installed in 1898. 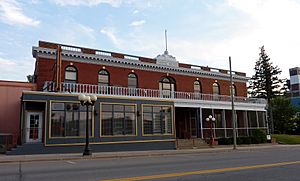 The Hotel Broz is listed on the NRHP.

According to the United States Census Bureau, the city has a total area of 3.81 square miles (9.87 km2), all of it land. The land around the area varies from flat to hilly.

The city of New Prague is located in two counties, Scott and Le Sueur. North of Main Street (Highway 13/19) is Scott County; and on the south side is Le Sueur County.

Minnesota State Highways 13, 19, and 21 are three of the main routes in New Prague.

There is one lake in the New Prague area, Cedar Lake (Scott County). The lake is a popular destination for fishing, ice fishing, water skiing, and jet skiing. A snowmobile trail runs through the lake during the winter season. An aerated area is located in the eastern part of the lake. The lake is 779.5 acres (3.155 km2), has a maximum depth of 13 feet (4.0 m) and has a 3.1-foot (0.94 m) water clarity. There are numerous developments in the area, including a new development located on County Road 89 on the west side of the lake (which is located outside of the New Prague City Limits).

There were 2,711 households, of which 42.5% had children under the age of 18 living with them, 55.7% were married couples living together, 9.7% had a female householder with no husband present, 5.0% had a male householder with no wife present, and 29.5% were non-families. 24.6% of all households were made up of individuals, and 11.7% had someone living alone who was 65 years of age or older. The average household size was 2.67 and the average family size was 3.22.

Dožínky is a Czech Harvest Festival patterned after the "Old Country" original. The Dožínky Festival in the Czech Republic is celebrated annually to give thanks for the bountiful harvest.

All content from Kiddle encyclopedia articles (including the article images and facts) can be freely used under Attribution-ShareAlike license, unless stated otherwise. Cite this article:
New Prague, Minnesota Facts for Kids. Kiddle Encyclopedia.