Mound Bayou is a city in Bolivar County, Mississippi, United States. The population was 1,533 at the 2010 census, down from 2,102 in 2000. It is notable for having been founded as an independent black community in 1887 by former slaves led by Isaiah Montgomery.

Mound Bayou has a 98.6 percent African-American majority population, one of the largest of any community in the United States. The current mayor of Mound Bayou is Darryl R. Johnson.

According to the United States Census Bureau, the city of Mound Bayou has a total area of 0.9 square miles (2.3 km2), all land.

There were 687 households out of which 38.4% had children under the age of 18 living with them, 24.7% were married couples living together, 43.7% had a female householder with no husband present, and 26.5% were non-families. 24.7% of all households were made up of individuals and 9.8% had someone living alone who was 65 years of age or older. The average household size was 3.06 and the average family size was 3.66. 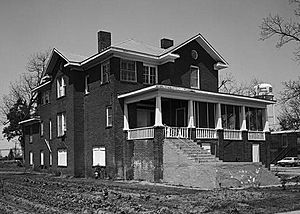 The Isaiah Thornton Montgomery House is one of three sites in Mound Bayou listed on the National Register of Historic Places.

Mound Bayou traces its origin to people from the community of Davis Bend, Mississippi. The latter was started in the 1820s by the planter Joseph E. Davis (brother of former Confederate president Jefferson Davis), who intended to create a model slave community on his plantation. Davis was influenced by the utopian ideas of Robert Owen. He encouraged self-leadership in the slave community, provided a higher standard of nutrition and health and dental care, and allowed slaves to become merchants. In the aftermath of the Civil War, Davis Bend became an autonomous free community when Davis sold his property to former slave Benjamin Montgomery, who had run a store and been a prominent leader at Davis Bend. The prolonged agricultural depression, falling cotton prices and white hostility in the region contributed to the economic failure of Davis Bend.

Isaiah T. Montgomery led the founding of Mound Bayou in 1887 in wilderness in northwest Mississippi. The bottomlands of the Delta were a relatively undeveloped frontier, and blacks had a chance to clear land and acquire ownership in such frontier areas. By 1900 two-thirds of the owners of land in the bottomlands were black farmers. With high debt and continuing agricultural problems, most of them lost their land and by 1920 were sharecroppers. As cotton prices fell, the town suffered a severe economic decline in the 1920s and 1930s.

Shortly after a fire destroyed much of the business district, Mound Bayou began to revive in 1942 after the opening of the Taborian Hospital by the International Order of Twelve Knights and Daughters of Tabor, a fraternal organization. For more than two decades, under its Chief Grand Mentor Perry M. Smith, the hospital provided low-cost health care to thousands of blacks in the Mississippi Delta. The chief surgeon was Dr. T.R.M. Howard who eventually became one of the wealthiest black men in the state. Howard owned a plantation of more than 1,000 acres (4.0 km2), a home-construction firm, a small zoo, and built the first swimming pool for blacks in Mississippi. In 1952, Medgar Evers moved to Mound Bayou to sell insurance for Howard's Magnolia Mutual Life Insurance Company. Howard introduced Evers to civil rights activism through the Regional Council of Negro Leadership which organized a boycott against service stations which refused to provide restrooms for blacks. The RCNL's annual rallies in Mound Bayou between 1952 and 1955 drew crowds of ten thousand or more. During the trial of Emmett Till's alleged killers, black reporters and witnesses stayed in Howard's Mound Bayou home, and Howard gave them an armed escort to the courthouse in Sumner.

Mound Bayou was an oasis in turbulent times. While the rest of Mississippi was violently segregated, inside the city there were no racial codes... At a time when blacks faced repercussions as severe as death for registering to vote, Mound Bayou residents were casting ballots in every election. The city has a proud history of credit unions, insurance companies, a hospital, five newspapers, and a variety of businesses owned, operated, and patronized by black residents. Mound Bayou is a crowning achievement in the struggle for self-determination and economic empowerment.

All content from Kiddle encyclopedia articles (including the article images and facts) can be freely used under Attribution-ShareAlike license, unless stated otherwise. Cite this article:
Mound Bayou, Mississippi Facts for Kids. Kiddle Encyclopedia.