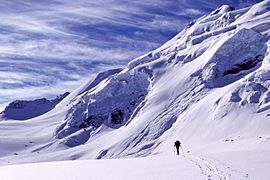 Mt. Balfour approach to col off to the left 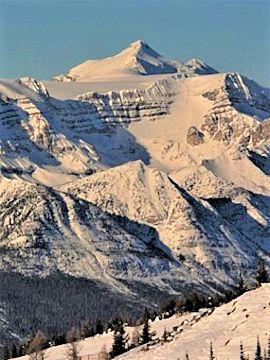 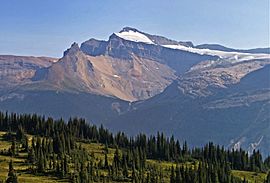 Mount Balfour is a mountain located on the Continental Divide, part of the border between British Columbia and Alberta, in the Waputik Range in the Park Ranges of the Canadian Rockies.It is the 71st highest peak in Alberta and the 113th highest in British Columbia; it is also the 52nd most prominent in Alberta.

The mountain was named by James Hector in 1859 after Professor John Hutton Balfour, a Scottish botanist and instructor at the University of Edinburgh where Hector had studied.

Early attempts to climb the mountain were made from Niles Pass via Sherbrooke Lake. The first ascent was made on August 18, 1898 by C.L. Noyes, C.S. Thompson, G.M. Weed; members of the Appalachian Mountain Club. The party started their ascent from Hector Lake which they had reached by crossing Dolomite Pass to Bow Lake and then continuing south. C.E. Fay had also attempted the mountain in 1898 via the Sherbrooke Lake/Niles Pass approach but were eventually turned back by poor weather and inexperience. Parties from the ACC completed ascents of Balfour in 1909 via Sherbrooke Lake, Niles Pass, Daly Glacier and then summitting via the SE arête.

Based on the Köppen climate classification, Mount Balfour is located in a subarctic climate with cold, snowy winters, and mild summers. Temperatures can drop below −20 °C with wind chill factors below −30 °C.

All content from Kiddle encyclopedia articles (including the article images and facts) can be freely used under Attribution-ShareAlike license, unless stated otherwise. Cite this article:
Mount Balfour Facts for Kids. Kiddle Encyclopedia.