Mount Bross is a high mountain summit in the Mosquito Range of the Rocky Mountains of North America. The 14,178-foot (4,321 m) fourteener is located in Pike National Forest, 4.1 miles (6.6 km) northwest by north (bearing 327°) of the Town of Alma in Park County, Colorado, United States. Mount Bross is named in honor of William Bross, who owned property in the area.

With a topographic prominence in the range of 292 to 332 feet (89 to 101 m), Mount Bross barely qualifies as an independent peak by the standard 300 foot prominence rule. It is often climbed together with Mount Lincoln and nearby Mount Democrat.

On March 9, 1869, Daniel Plummer and Joseph Myers, both of Alma, Colorado, filed claim on the first silver mine on Mount Bross. They named their holding "The Dwight". The adjoining Moose Mine, which Plummer and Myers filed in 1871, became the most productive silver mine in Park County. A native of Pennsylvania, Myers later became a town trustee in Fairplay, the county seat of Park County. The Dolly Varden Mine, discovered by George Brunk and Assyria "Cy" Hall in 1872, ranked second in silver production to the Moose Mine but outpaced the Moose in the richness of its ore. At the time the Dolly Varden opened, Hall was the sheriff of Park County.

The pioneering American Presbyterian missionary, Sheldon Jackson went there from Denver to preach the gospel to the miners. He later established missions in Alaska.

In 2005, the summit of Mount Bross was closed to the public because of safety concerns related to mines and trail access through private land. 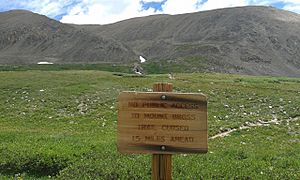 All content from Kiddle encyclopedia articles (including the article images and facts) can be freely used under Attribution-ShareAlike license, unless stated otherwise. Cite this article:
Mount Bross Facts for Kids. Kiddle Encyclopedia.