Mount Grace, 1,617 feet (493 m), is a prominent monadnock located in north central Massachusetts in the town of Warwick, approximately two miles south of the New Hampshire border. The mountain is rugged and largely wooded, but a firetower on the summit provides expansive views of the surrounding rural countryside. Little Mount Grace, 1,226 feet (374 m), is the southern summit of the mountain. Mount Grace supports a predominantly northern hardwood forest as well as stands of red spruce near its summit.

Mount Grace is named after Grace (Sarah) Rowlandson, the daughter of Mary Rowlandson, a Puritan colonist of Massachusetts. Grace died after she and her mother were captured by Native Americans of the Narragansett Tribe during King Philip's War in 1676.

In the 1930s, the Civilian Conservation Corps built a picnic area on the west side of Route 78, at the bottom of the mountain, below the Gulch. The banks of the brook were walled with stone. The Corps also built a picnic area with stone fireplaces and grills, and road access to it. The hardwoods were thinned out, leaving only the White Pines.

In the 1980s, the State ceased maintaining the picnic area. Brush grew up. The area started the transition back to forest. By the late 1990s many of the big White Pines were dead. The State logged the area, and left the slash on the ground to help new trees grow.

The summit also has a small picnic area.

Mount Grace is located within the 1,458-acre (590 ha) Mount Grace State Forest. Hiking, backpacking, hunting, horseback riding, cross-country skiing, mountain biking, and snowshoeing are enjoyed on the mountain. The 114 mile (183 km) Metacomet-Monadnock Trail traverses the summit. A lean-to on the east side of the mountain is available for primitive camping.

The Mount Grace Land Conservation Trust, active in the area, takes its name from Mount Grace. 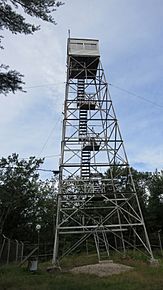 Warwick Fire Tower is a fire lookout tower on the summit of the mountain. The first Warwick Fire Tower was a 40’ iron windmill type tower with a ladder and 6’x6’ cab built in 1911. It was replaced in 1920 with a 68’ iron tower that served until blown down by the 1938 hurricane. The present 68’ steel tower with 10’x10’ wooden cab was constructed in 1939. In spring of 2010, the fire tower was completely rehabilitated. It remains in service as an active state tower. It is staffed from March–May, and late August–October depending on fire danger. In 2004 this tower was listed on the National Historic Lookout Register as US 628, MA 39.

All content from Kiddle encyclopedia articles (including the article images and facts) can be freely used under Attribution-ShareAlike license, unless stated otherwise. Cite this article:
Mount Grace Facts for Kids. Kiddle Encyclopedia.