Mount Jackson is a town in Shenandoah County, Virginia, United States. The population was 1,994 at the 2010 census.

For highway travelers passing by, Mount Jackson is easily identified from I-81 exit 273 by the water tower painted as a basket of apples, which was recently repainted. For those exploring off the highway, the town has history as a commercial and railroad hub in the region, with rich Civil War heritage and a historic district listed on the National Register of Historic Places.

According to the United States Census Bureau, the town has a total area of 1.2 square miles (3.2 km²), all of it land.

There were 667 households, out of which 29.7% had children under the age of 18 living with them, 49.2% were married couples living together, 12.6% had a female householder with no husband present, and 34.0% were non-families. 29.1% of all households were made up of individuals, and 15.0% had someone living alone who was 65 years of age or older. The average household size was 2.49 and the average family size was 3.01. 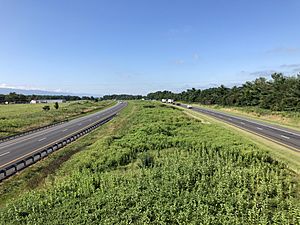 I-81 in Mount Jackson

The primary highway passing by Mount Jackson is Interstate 81, which continues south to southwestern Virginia and Tennessee, and north to West Virginia, Maryland, Pennsylvania and New York. Virginia State Route 292 connects I-81 to U.S. Route 11, the original and historic Valley Turnpike which now serves as the main local road passes through downtown Mount Jackson. Rt. 11, the historic route through the Shenandoah Valley, roughly parallels I-81 and offers access to it. Virginia State Route 263 named Orkney Springs Road extends westward from US 11 in Mount Jackson, connecting to Basye resort area and the historic Orkney Springs in the mountains of westernmost Shenandoah County. 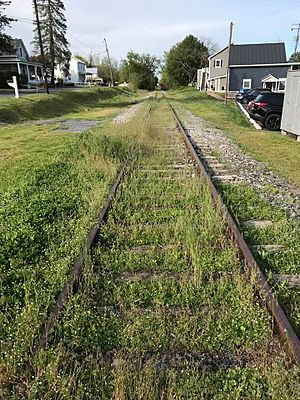 The out-of-service Norfolk Southern rail line in Mt. Jackson, Virginia was originally the terminus of the Manassas Gap Railroad.

Norfolk Southern has a rail line extending through Mt. Jackson, originally part of the historic Manassas Gap Railroad, that it has put out of service, lacking industrial demand. The last train traveled south from Mt. Jackson in 2014. In 2016 Norfolk Southern announced that it would no longer be maintaining the railbed, and the rail line has become overgrown with weeds and brush. Pending formal abandonment by the Norfolk Southern, a consortium of public, private and non-profit organizations based in the counties of Shenandoah and Rockingham, Virginia have come together in an exploratory group called the Shenandoah Rail Trail Partnership to seek transformation of the 38.5 mile out-of-service rail corridor from Strasburg to Broadway (including Mt. Jackson as a historic hub) into a multi-use trail.

All content from Kiddle encyclopedia articles (including the article images and facts) can be freely used under Attribution-ShareAlike license, unless stated otherwise. Cite this article:
Mount Jackson, Virginia Facts for Kids. Kiddle Encyclopedia.