Mount Kaweah is a mountain in California's Sequoia National Park and forms part of the Kaweah Peaks Ridge, a spur of the Great Western Divide which extends south from Triple Divide Peak. It has a summit elevation of 13,807 feet (4,208 m), the highest along the Kaweah ridge.

A rare pine, the Foxtail Pine, lives on the southern slopes of Mount Kaweah. 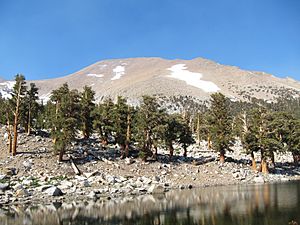 Highest mountain in the southwest Sierra

Mount Kaweah is the highest mountain in the southwest Sierra.

All content from Kiddle encyclopedia articles (including the article images and facts) can be freely used under Attribution-ShareAlike license, unless stated otherwise. Cite this article:
Mount Kaweah Facts for Kids. Kiddle Encyclopedia.