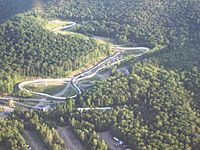 The mountain is part of the Olympic Regional Development Authority (ORDA). ORDA maintains the cross-country ski and biathlon trail system originally used in the 1980 Olympics.

During the summer, the mountain is used for hiking and mountain biking.

All content from Kiddle encyclopedia articles (including the article images and facts) can be freely used under Attribution-ShareAlike license, unless stated otherwise. Cite this article:
Mount Van Hoevenberg Facts for Kids. Kiddle Encyclopedia.