Mudgee /ˈmʌdʒi/ is a town in the Central West of New South Wales, Australia. It is in the broad fertile Cudgegong River valley 261 kilometres north-west of Sydney. Mudgee is at the centre of the Mid-Western Regional Council local government area. At the 2011 census, Mudgee had a population of 9,830 people.

The Mudgee district lies across the edge of the geological structure known as the Sydney Basin. 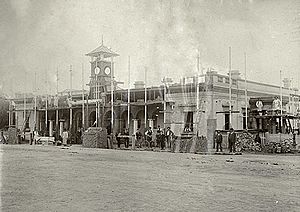 The name Mudgee is derived from the Wiradjuri term Moothi meaning "Nest in the Hills" or "mou-gee" meaning "contented". James Blackman was the first European settler to cross the Cudgegong River in 1821 followed quickly by Lieutenant William Lawson who was then commandant of Bathurst. Lawson would later take up 6,000 acres (24 km²) in the area.

George and Henry Cox, sons of William Cox, were the first settlers on the Cudgegong River when they established the Menah run, 3 kilometres north of the current town. The European settlers were soon in conflict with the Wiradjuri over a range of issues including killing of livestock and animals such as kangaroos and possums which were major food sources for the Wiradjuri. Martial law was declared by Governor Brisbane in 1824 leading to the killing of a large number of the Wiradjuri people.

While the site of Mudgee was surveyed for a village in 1823, Menah was the original settlement having a police station and a lock up by 1833. It has been incorrectly claimed that Robert Hoddle designed the village which was gazetted in 1838. Although Hoddle was the first surveyor in the region, marking out the boundaries of Putta Bucca and Bombira, by the time the village was gazetted, he had already left the district to become leader of the Port Phillip Survey. John Blackman built a slab hut, the first dwelling in Mudgee and its general store. By 1841, there were 36 dwellings, three hotels, a hospital, a post office, two stores and an Anglican church. The police station moved from Menah in the mid-1840s while an Anglican school was established in that decade as well. 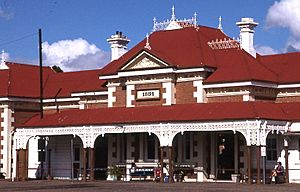 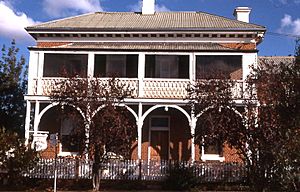 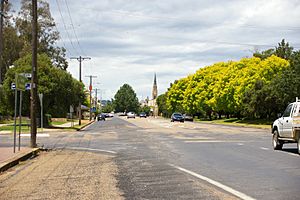 View of Market Street, looking towards the centre of the town

In 1851, the population of Mudgee was 200. However, the population exploded as the discovery of gold in nearby Hargraves by Edward Hargraves led to a gold rush in New South Wales. While no gold was found in Mudgee itself, the town prospered as gold was discovered in nearby towns such as Gulgong, Hill End and Windeyer, New South Wales temporarily reached populations of 20,000. Mudgee was a centre for the local goldfields and grew rapidly as a result.

Mudgee was declared as a municipality in 1860 making it the second oldest municipality west of the Great Dividing Range with a population of 1500 in 1861. A public school was built in the 1850s together with the present Catholic and Anglican churches and a Methodist and Presbyterian church. A new police station, courthouse, Mechanics' Institute and a town hall were built in the 1860s. There were four coach factories operating in Mudgee to cater for the demand of the nearby goldfields. The National Trust of Australia has a number of these buildings registered including the Mudgee Museum (formerly the Colonial Inn), the Catholic presbytery, the court house, the police station and the Anglican Church. On 1 June 1861 the Electric Telegraph system arrived and was opened for messages to be transmitted and received at the Telegraph office.

One of the gold miners attracted to the Mudgee district was Niels Peter Larsen who married Louisa Albury in Mudgee in 1866. They had a child, leading Australian poet Henry Lawson in Grenfell in 1867 and changed their names to Peter and Louisa Lawson. By the birth of their third child, they moved to a selection at Pipeclay (now Eurunderee) 8 km north of Mudgee. Louisa Lawson's vigorous lobbying led to the establishment of the slab-and-bark Eurunderee Public School in 1876 with Henry Lawson attending the school for the first time aged nine. He would later write about the school in his poem "The Old Bark School". Lawson would later attend St. Matthews Central School, Mudgee before his progressively worsening deafness leading to him leaving school at the age of 14. Lawson would live in the Mudgee district until the age of 15 and many of his stories were written about the district.

As the gold mines petered out in the latter half of the 19th century, Mudgee was sustained by the strength of its wool industry as well as the nascent wine industry established by a German immigrant, Adam Roth, in the 1850s. The opening of the railway extension from Rylstone to Mudgee occurred on 10 September 1884. The railway boosted the town's agricultural industries. The railway between Rylstone and Mudgee closed on 2 March 1992. This same railway section re-opened eight years later, on 2 September 2000. The Wallaby Track Drive Tour visits various sites associated with Lawson including the old Eurundee Public School, the Henry Lawson memorial, the Budgee Budgee Inn, Sapling Gully, Golden Gully and the Albury Pub which was owned by Lawson's grandfather.

Mudgee has a humid subtropical climate (Cfa), with semi-arid (BSh) characteristics. Summers are hot with frequent thunderstorms, however nighttime temperatures are still cool. Winters are cool, with frosty mornings and sunny days, interspersed with periods of heavy rain and occasionally even snow. Rainfall is moderate and falls fairly evenly all year round, with a slight peak in summer. Extreme temperatures have ranged from 42.5 °C (108.0 °F) to -8.3 °C (17.1 °F). The highest monthly rainfall ever recorded was 303.2 mm (11.9 in) of rain in March 1926. Mudgee gets 113.0 clear days, annually.

All content from Kiddle encyclopedia articles (including the article images and facts) can be freely used under Attribution-ShareAlike license, unless stated otherwise. Cite this article:
Mudgee Facts for Kids. Kiddle Encyclopedia.