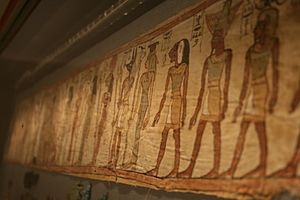 Mummies of humans and other animals have been found on every continent, both as a result of natural preservation through unusual conditions, and as cultural artifacts. Over one million animal mummies have been found in Egypt, many of which are cats. They used a hook to remove the brain and they use a knife to take out the organs.

Intentional mummification was common in ancient Egypt, especially for burying Egyptian pharaohs. Osiris was probably the first mummy in Egypt.

It takes about 70 days to completely mummify a dead body. The first step is to push a sharp rod up the nose and into the brain. From there, the brain is broken up into tiny pieces and removed through the nose then fill the nose with saw dust. Next, they make a hole in the body to remove all the organs except for the heart. Jars which had the heads of gods on top were used to store the organs. The hole was then filled with linen and spices and the body was left under a salt to become dry. Later, after 40 days the body was wrapped in linen bandages. Priests surrounded the body while it was being wrapped and said spells. After the mummifying process was complete, a mask was placed over the head so it can be known in the afterlife.

There were no restrictions on who could be mummified. Any Egyptian who could afford to pay for the expensive process of preserving their bodies for the afterlife. The Egyptians believed in life after death. They believed that they had to preserve their bodies so they could lead a new life. The Egyptians believed that when they died they would make a journey to another world where they would lead a new life. They would need all the things they had used when they were alive so their family would put those things in their grave. Egyptians paid vast amounts of money to have their bodies properly preserved. It took a very long time from start to finish it took them 70 days to embalm a body. Canopic jars were used by Egyptians to hold the internal organs. It was very important to Egyptians religion believed that the human body was preserved. Anubis was a god of mummification, he had a human body and a head of a jackal. His job was to prepare of the dead to be received by Osiris.

Mummies were ground up into a powder, called Mumia which was used as a drug.