Nambung National Park is a national park in the Wheatbelt region of Western Australia, 200 km northwest of Perth, Australia and 17 km south of the small coastal town of Cervantes. The park contains the Pinnacles Desert which is an area with thousands of limestone formations called pinnacles.

The park derives its name from an indigenous Australian word possibly meaning crooked or winding. The word was first used in 1938 when naming the Nambung River which flows into the park and disappears into a cave system within the limestone. The Yued people are the acknowledged traditional custodians of the land since before the arrival of Europeans.

Nambung National Park also contains beaches at Kangaroo Point and Hangover Bay, as well as coastal dunes and flowering plants in low heathland areas. A boardwalk in the northern area of the park at Lake Thetis allows visitors to view thrombolites which, like stromatolites, are structures built by micro-organisms, especially cyanobacteria. Some of the fossilized thrombolites have been dated to 3.6 billion years old. The Pinnacles Desert Discovery Centre features exhibits about the geology of the pinnacles formations and the cultural and natural heritage values of the area.

Europeans first visited the area in 1658 when Dutch maps recorded North and South Hummocks on their maps. Phillip Parker King also mentioned the Hummocks in his journals in 1820. The Pinnacles Desert area remained relatively unknown until surveyed in 1934. The national park was created in July 1994 by combining three separate reserve areas gazetted in 1956, 1967 (the Pinnacles) and 1968.

The park is bordered to the north by the Southern Beekeeper's Nature Reserve and to the south by Wanagarren Nature Reserve. A large area of vacant Crown land is found along much of the eastern boundary while the Indian Ocean defines the park's western boundary. Visitors can access the Pinnacles Desert from points north or south of Cervantes via the Indian Ocean Drive or via Cervantes Road from the east. The park is located 17 km south of Cervantes. 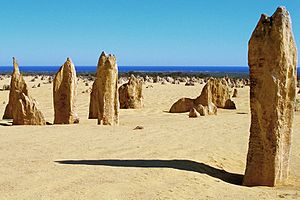 Some taller pinnacles with the Indian Ocean in the background

The Pinnacles Desert contains thousands of limestone pillars. The pillars are the weathered and eroded fragments of limestone beds composed of deposited marine organisms such as coral and molluscs. Some of the tallest pinnacles reach heights of up to 3.5m above the yellow sand base. The different types of formations include ones which are much taller than they are wide and resemble columns—suggesting the name of Pinnacles—while others are only a meter or so in height and width resembling short tombstones. A cross-bedding structure can be observed in many pinnacles where the angle of deposited sand changed suddenly due to changes in prevailing winds during formation of the limestone beds. Pinnacles with tops similar to mushrooms are created when the calcrete capping is harder than the limestone layer below it. The relatively softer lower layers weather and erode at a faster rate than the top layer leaving behind more material at the top of the pinnacle.

Humpback whales visit the Indian Ocean waters adjacent to the park during their northern and southern migration seasons, while sea lions and dolphins are year-round inhabitants.

All content from Kiddle encyclopedia articles (including the article images and facts) can be freely used under Attribution-ShareAlike license, unless stated otherwise. Cite this article:
Nambung National Park Facts for Kids. Kiddle Encyclopedia.