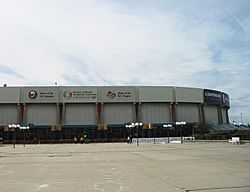 The Nassau Veterans Memorial Coliseum is a sports arena in Uniondale, New York. The arena opened on February 11, 1972, and is the current home to the New York Islanders of the National Hockey League (NHL). The arena is commonly known as Nassau Coliseum or The Coliseum. The arena was also notable for hosting the first part of the World Wrestling Federation's WrestleMania 2 in 1986. In addition, it has also hosted WWE's SummerSlam in August 2002, The Great American Bash in July 2008, and WWE Fatal 4-Way on June 20, 2010. The arena was also the home of the New York Nets from 1972 to 1977.

All content from Kiddle encyclopedia articles (including the article images and facts) can be freely used under Attribution-ShareAlike license, unless stated otherwise. Cite this article:
Nassau Veterans Memorial Coliseum Facts for Kids. Kiddle Encyclopedia.