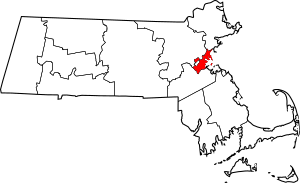 Location of Suffolk County in Massachusetts

This is a list of the National Register of Historic Places listings in Suffolk County, Massachusetts.

For reasons of length, the Boston list has been split into northern and southern listings, divided by the Massachusetts Turnpike. Northern Boston has 145 of these listings, including 39 districts, 48 landmarks, and three National Historic Landmark Districts. Southern Boston, including locations in Boston Harbor, has 153 listings, including 45 districts, 12 landmarks, and one National Historic Landmark District. Two historic districts overlap into both northern and southern Boston: milestones that make up the 1767 Milestones are found in both areas, and the Olmsted Park System extends through much of the city.

All content from Kiddle encyclopedia articles (including the article images and facts) can be freely used under Attribution-ShareAlike license, unless stated otherwise. Cite this article:
National Register of Historic Places listings in Suffolk County, Massachusetts Facts for Kids. Kiddle Encyclopedia.