The National Ringette League (also indicated by the initials NRL) is a elite league of ringette in Canada. The NRL groups together the best nineteen-year-old players at least of the country. The NRL consists of nineteen teams separated into two conferences. The western conference has six teams and the east conference has thirteen teams. The LNR recovers directly from Ringuette Canada, the guiding organisation for the ringette in Canada. The great majority of the players come from Canada even if some players arise from the United States or from Finland.

Ringette is introduced in 1963 at North Bay, Ontario. The sport is now played by 50,000 girls across Canada. The creation of the National Ringette League is following the success of the 2002 ringette world championships at Edmonton where Canada took gained the golden medal. The first NRL season is thrown in November 2004 with 17 teams. In 2011-12 season, the NRL enters its eighth season with 19 teams playing in two conferences: 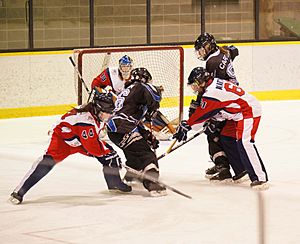 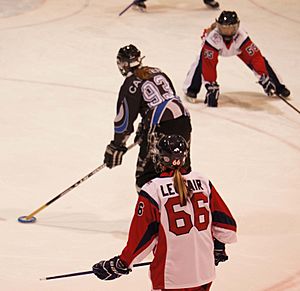 The regular season of the NRL begins in October and comes to an end in March. All in all, thirty one matches are competed by each of the teams during the regular season. Each of the teams faces only teams of his conference. This structure allows to reduce the costs of transport given the size of the Canadian territory covered by the league. At the end of the regular season, there is a break of a week when the various individual distinctions are awarded, then a NRL Championship Tournament.

From March 27th till April 2nd, 2011, the NRL Championship Tournament takes place to Cambridge, Ontario. In Final game, the Edmonton WAM! triumph over the Cambridge Turbos

This is a list of NRL champions season by season:

The championship final game is broadcast on Rogers TV.

At the end of each season (at the end of March) the League quotes its annuals awards during the week of break pre-tournament eliminating playoffs. The annual NRL honors reward the athletes having obtained excellent performances during the regular season. Each of 2 conference presents one athlete and a coach as finalist in every category, and the National Championship Tournament are chosen among these finalists.

The NRL works with the lower Ringette leagues to help young girl players improve in the sport. Several NRL teams additional teams of young players under 19 years old and under 16 years old. The Canadians Championship U16 and U19 (usually in April) take place in the same place as the NRL playoff tournament. This helps the tracers from the NRL teams to identify the young talented players.

All content from Kiddle encyclopedia articles (including the article images and facts) can be freely used under Attribution-ShareAlike license, unless stated otherwise. Cite this article:
National Ringette League Facts for Kids. Kiddle Encyclopedia.