Neversink is a town in Sullivan County, New York, United States. The population was 3,557 at the 2010 census.

The Town of Neversink is in the northeastern corner of the county. The Neversink River that flows through the town is claimed to be the birthplace of American fly fishing.

The town was formed from the Town of Rochester in Ulster County, New York in 1798 before Sullivan County was formed. The Town of Rockland was created from part of Neversink in 1809, and part of Neversink was used to make the newer Town of Fallsburg in 1826. When the Neversink and Rondout reservoirs were built, as part of the New York City water supply system, many communities were submerged. The communities of Old Neversink and Bittersweet were lost to form the Neversink Reservoir, while Eureka, Montela, and Lackawack were lost to form the Rondout Reservoir.

In 1935, the town passed a dry law prohibiting the sale of alcoholic beverages, which remained in effect despite repeated efforts to repeal it. The town partially lifted the ban in 2015, allowing alcohol in restaurants but retaining the ban on sales in convenience stores.

Part of the town is in the Catskill Park. The northern and eastern town lines are on the border of Ulster County, New York.

There were 1,346 households, out of which 35.7% had children under the age of 18 living with them, 61.3% were married couples living together, 9.3% had a female householder with no husband present, and 25.1% were non-families. 21.0% of all households were made up of individuals, and 8.7% had someone living alone who was 65 years of age or older. The average household size was 2.64 and the average family size was 3.06.

Communities and locations in Neversink 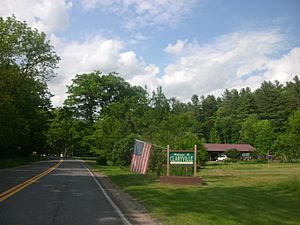 All content from Kiddle encyclopedia articles (including the article images and facts) can be freely used under Attribution-ShareAlike license, unless stated otherwise. Cite this article:
Neversink, New York Facts for Kids. Kiddle Encyclopedia.