New Norfolk is a town on the Derwent River, in the south-east of Tasmania, Australia. At the 2011 census, New Norfolk had a population of 5,543.

Situated 32 kilometres (20 mi) north-west of Hobart on the Lyell Highway, New Norfolk is a modern Australian regional centre which retains evidence of its pioneer heritage. Two examples of this heritage are Tasmania's oldest Anglican church, St. Matthews (built in 1823) and one of Australia's oldest hotels, The Bush Inn (Tasmania), trading continuously in the same building (built in 1815) since issue of the first licence on 29 September 1825. Many private homes from the 1820s have also survived.

Before colonization by the British, the area now known as New Norfolk was occupied by the Leenowwenne clan, one of five clans of the Big River nation. 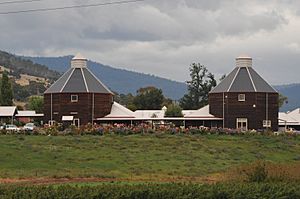 Approximately 163 of the pioneers who settled around the town were from the 554 folk resettled when the first Norfolk Island settlement was closed, most arriving during the period between 29 November 1807 and 2 October 1808. These Norfolk Islanders were mainly farming families, who were offered land grants in Tasmania as compensation for their relocation.

The climate was colder than sub-tropical Norfolk Island, which proved a challenge for the hardy pioneers during the first few years, but eventually the district became self-supporting. In 1825 the original name of the town, Elizabeth Town, was changed to New Norfolk in honour of their former home.

Many founding folk were "First Fleeters", transferred from Sydney to Norfolk Island when it was settled just a few weeks after Sydney. Ten First Fleeters are buried in the Methodist Chapel at Lawitta, New Norfolk.

Notable is Betty King, née Elizabeth Thackery, a first fleet convict girl who married at New Norfolk on the 28th January 1810. The headstone on Betty's well-tended grave reads, "The first white woman to set foot in Australia" from the First Fleet at Sydney Cove. She is also believed to be the last surviving First Fleeter, male or female, when she died at 89 years of age on 7 August 1856. Her husband was Marine Private Samuel King of the First Marine Regiment, another First Fleeter who arrived aboard the warship "Sirius". Sam King was the last male "First Fleeter" to survive until 21 October 1849, aged 86 years.

The pioneers were successful farmers of the rich land around the town. Initially cattle and sheep were predominant, with some cropping as land was cleared. Hop plants were introduced in 1846, and became an important crop. A number of hop drying kilns or "oast houses" remain in the area.

The first road connecting the town to Hobart was built in 1818.

On 19 April 1827, Governor George Arthur issued an order to create the Willow Court infirmary, later known as Lachlan Park and most recently the Royal Derwent Hospital, as an asylum to accept sick and invalid convicts from Hobart, Launceston and outstations. Willow Court is now a large antiques centre.

For some years after 1848, New Norfolk was the place of exile of the Irish nationalist leader Terence MacManus. His cottage "Kilburn Grange" still stands. Later he was joined by his fellow Irish rebel, William Smith O'Brien.

In 1887, the railway, now preserved as the Derwent Valley Railway, was built. In 1888, Australia's first telephone trunk call was connected from Hobart to the Bush Inn Hotel in New Norfolk.

During the 1940s, a newsprint mill was established at nearby Boyer, boosting industry in the local area. 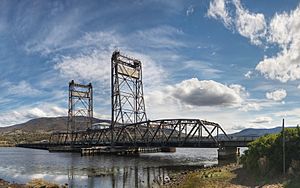 The Bridgewater Bridge was opened regularly by the Australian Newsprint Mills to transport paper via water to Hobart until 1984 when river transportation ceased.

A rail link was opened in 1887 but was closed in 1995 when floods and declining usage made repairs uneconomic. The line has been used for tourist trips by the Derwent Valley Railway but this has not been possible since 2005 due to lack of support for track maintenance.

New Norfolk is a central location for tourism in the upper Derwent Valley.

New Norfolk is near the tourist attractions of Mount Field, Lake Pedder, Strathgordon, Gordon Dam hydroelectric site, and the South West Wilderness. The Tourist Information Centre staffed by volunteers is located in Circle Street next to the Council Chambers at the top end of High Street.

The 1825 Heritage listed Woodbridge on the Derwent, on the river next to the bridge, operates as a small luxury hotel, and is presently the only 5 star hotel in Tasmania. It draws a clientele from all over the world.

It has a long and interesting history. Built by hand by convicts for Captain Roadknight, the first Constable of the then Elizabeth Town, it was later owned by William Sharland, assistant surveyor of Tasmania, and his descendants. William Sharland constructed the wooden bridge across the Derwent next to Woodbridge - this was the first bridge across the Derwent, and the original Tollhouse still stands today.

By the 1950s, Woodbridge was derelict, and was converted into 7 flats. Again, by 2003, it was again derelict, and It was completely restored between 2003 and 2005. The restoration won the 2005 Tasmanian Restoration of the Year Award, and the 2006 Australian Restoration of the Year Award The building is unique in that it was built in the prevailing simple Georgian style, but it has an octagonal three storey central tower, reminiscent of French chateau.

[[File:Woodbridge on the Derwent, New norfolk.jpg|thumb|Woodbridge, from the bridge over the Derwent]]

New Norfolk is the warmest area of Tasmania in summer and has a cool temperate oceanic climate that is classified as Cfb under Köppen Climate Classification.

All content from Kiddle encyclopedia articles (including the article images and facts) can be freely used under Attribution-ShareAlike license, unless stated otherwise. Cite this article:
New Norfolk, Tasmania Facts for Kids. Kiddle Encyclopedia.