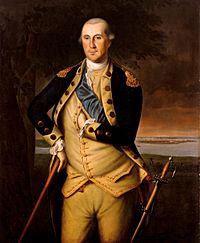 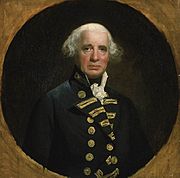 Admiral Richard Howe, from a mezzotint engraving by R. Dunkarton, after the painting by John Singleton Copley

The New York and New Jersey campaign was a series of battles in 1776 and the winter months of 1777 for control of New York City and the state of New Jersey during the American Revolutionary War between British forces under General Sir William Howe and the Continental Army under General George Washington. Howe was successful in driving Washington out of New York City, but overextended his reach into New Jersey, and ended the active campaign season in January 1777 with only a few outposts near the city. The British held New York harbor for the rest of the war, using it as a base for expeditions against other targets.

First landing unopposed on Staten Island on July 3, 1776, Howe assembled an army composed of elements that had been withdrawn from Boston in March following their failure to hold that city, combined with additional British troops, as well as Hessian troops hired from several German principalities. Washington had New England soldiers as well as regiments from states as far south as Virginia. Landing on Long Island in August, Howe defeated Washington in the largest battle of the war, but the Continental Army was able to make an orderly retreat to Manhattan under cover of darkness and fog. Washington suffered a series of further defeats in Manhattan, with the exception of the skirmish at Harlem Heights, and eventually withdrew to White Plains, New York. At that point Howe returned to Manhattan to capture forces Washington had left in the north of the island.

Washington and much of his army then crossed the Hudson River into New Jersey, and retreated all the way across the Delaware River into Pennsylvania, shrinking due to ending enlistment periods, desertions, and poor morale. Howe ordered his troops into winter quarters in December, establishing a chain of outposts from New York to Burlington, New Jersey. Washington, in a tremendous boost to American morale, launched a successful strike against the Trenton garrison after crossing the icy Delaware River, prompting Howe to withdraw his chain of outposts back to New Brunswick and the coast near New York, while Washington established his winter camp at Morristown. During the remaining winter months, both sides skirmished frequently as the British sought forage and provisions.

Britain maintained control of New York City and some of the surrounding territory until the war ended in 1783, using it as a base for operations elsewhere in North America. In 1777, General Howe launched a campaign to capture Philadelphia, leaving General Sir Henry Clinton in command of the New York area, while General John Burgoyne led an attempt to gain control of the Hudson River valley, moving south from Quebec and failed at Saratoga. Northern New Jersey was the scene of skirmishing between the opposing forces for the rest of the war.

All content from Kiddle encyclopedia articles (including the article images and facts) can be freely used under Attribution-ShareAlike license, unless stated otherwise. Cite this article:
New York and New Jersey Campaign Facts for Kids. Kiddle Encyclopedia.