Kids Encyclopedia Facts
In this article, the family name is Nguyễn. In accordance with Vietnamese custom, this person should be referred to by the given name, Trọng.

Nguyễn Phú Trọng (born 14 April 1944) is a Vietnamese politician who has served as the General Secretary of the Communist Party of Vietnam — the highest political position in Vietnam — since 2011. In addition, Nguyễn Phú Trọng served as president of Vietnam from 2018 to 2021. As general secretary, Nguyễn Phú Trọng heads the party's secretariat and is the Secretary of the Central Military Commission in addition to being the de facto head of the politburo, the highest decision-making body in Vietnam, which currently makes him the most powerful person in Vietnam.

On 3 October 2018, the Central Committee of the Communist Party of Vietnam formally nominated Nguyễn Phú Trọng for President of Vietnam, which was voted on at a subsequent session of the National Assembly, where the party holds an overwhelming majority. This made him the third person to simultaneously head the party and state after Ho Chi Minh (in North Vietnam only) and Trường Chinh. On 23 October 2018, he was elected as the ninth President of Vietnam in a meeting of the sixth session of the National Assembly. Nguyễn Phú Trọng stepped down as President in 2021 but remained as General Secretary of the Communist Party. 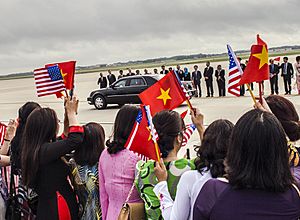 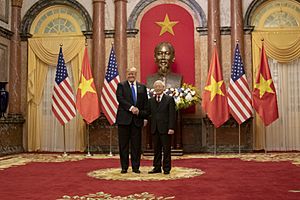 Nguyễn Phú Trọng was born in Đông Hội Commune, Đông Anh District. His official biography gives his family background only as "average peasant". He studied philology and earned his Bachelor degree in philology at Vietnam National University, Hanoi from 1963 to 1967. Nguyễn Phú Trọng officially became a member of the Communist Party of Vietnam in December 1968. He worked for the Tạp chí Cộng Sản (Communist Review), the theoretical and political agency of the Communist Party of Vietnam (formerly the Labor Party) in the periods of 1968–1973, 1976–1981 and 1983–1996. From 1973 to 1976, he underwent a political-economic post-graduate course at the High-level Nguyễn Ái Quốc Party School (now the Hồ Chí Minh National Academy of Politics and Public Administration). From 1991 to 1996, he served as the editor-in-chief of the Tạp chí Cộng Sản. Nguyễn Phú Trọng went to the Soviet Union in 1981 to study at the Academy of Sciences and received a Candidate of Sciences degree in history in 1983. In 1998, Nguyễn Phú Trọng entered the party section devoted to political work, making him one of the most prominent Vietnamese political theoreticians, heading the party Central Committee's Theoretical Council in charge of the party's theoretical work from 2001 to 2006.

Nguyễn Phú Trọng is a Marxist theoretician, and has long railed against some party members' loss of "Marxist-Leninist virtue".

On 14 April 2019, it was reported that Nguyễn Phú Trọng had been rushed to the Chợ Rẫy Hospital in Ho Chi Minh City after visiting Kiên Giang, according to overseas news sources. He was rumoured to have suffered a stroke. The Vietnamese government initially had no comment on the subject matter, but later confirmed from the Ministry of Foreign Affairs of Vietnam that he was "unwell, but will soon return to work". He reappeared on May 14, 2019 to discuss about the upcoming Party Congress.

On 6 July 2015, General Secretary Nguyễn Phú Trọng arrived in the United States to begin his United States visit to July 10, 2015. This visit coincided with the milestone of twenty years since the United States and Vietnam normalized diplomatic relations. The talks with President Barack Obama were about human rights, security and defense and the Trans-Pacific Partnership.

On 27 January 2016, Nguyễn Phú Trọng was re-elected as General Secretary of the 12th Central Committee of the Communist Party of Vietnam at the first conference of the committee. At 72 years old, he was the 12th Committee's oldest member. For this term, Nguyễn Phú Trọng is ranked number one in the Politburo, marking a return to normality.

Nguyễn Phú Trọng hopes, under a one-party rule, to strengthen Vietnam's position in the world, turning it into an industrial country rather than a country that produces on primary products. "A country without discipline would be chaotic and unstable [...]. [W]e need to balance democracy and law and order", he said at the close of a meeting to choose the country's leadership for the next five years. "I very much hope the new faces in the politburo will push with reforms and bring the country forward, but I don't know whether they can do that", said Tran Thi Tram. "They will also have to really tackle the corruption problem, otherwise the people would be the ones to suffer most".

On 31 January 2021, Nguyễn Phú Trọng was re-elected as General Secretary for a third five-year term at the 13th National Congress.

On 1 February 2021, Nguyễn Phú Trọng attended a press conference. Nguyễn Phú Trọng said I am not in great health [...] I am old and I want to rest, but the Congress has elected me so I will comply with my duty to serve as a party member..

On 3 October 2018, Nguyễn Phú Trọng was chosen by the Central Committee of the Communist Party of Vietnam with 100% support to become the party nominee for the position of the President of Vietnam, becoming the official successor of Trần Đại Quang.

The National Assembly elected Nguyễn Phú Trọng as state president on October 23, 2018 with 99.79% percent of the vote. His swearing-in ceremony took place at the Grand Hall and was broadcast live on the afternoon on state radio and television systems.

The National Assembly on 2 April 2021 voted to relieve Nguyễn Phú Trọng's presidency with 91.25% of the vote. Nguyễn Phú Trọng remains de facto top leader in the country, serving as the General Secretary of the Communist Party.

Nguyễn Phú Trọng is married to Ngô Thị Mân. He has one daughter and one son, both of whom work as Government employees.

All content from Kiddle encyclopedia articles (including the article images and facts) can be freely used under Attribution-ShareAlike license, unless stated otherwise. Cite this article:
Nguyễn Phú Trọng Facts for Kids. Kiddle Encyclopedia.