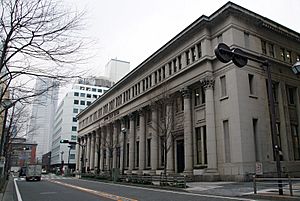 Nippon Yusen (日本郵船株式会社, Nippon Yūsen Kabushiki Kaisha), also known as NYK Line, is one of the largest shipping companies in the world. It is a core Mitsubishi company. The company has its headquarters in Chiyoda, Tokyo, Japan.

The company history began with the Tsukumo Shokai shipping company which was founded by the Tosa clan in 1870.

All content from Kiddle encyclopedia articles (including the article images and facts) can be freely used under Attribution-ShareAlike license, unless stated otherwise. Cite this article:
Nippon Yusen Facts for Kids. Kiddle Encyclopedia.