The mountain quail (Oreortyx pictus) is a small ground-dwelling bird in the New World quail family. This species is the only one in the genus Oreortyx, which is sometimes included in Callipepla. This is not appropriate, however, as the mountain quail's ancestors have diverged from other New World quails earlier than the bobwhites, no later than 6 mya.

The bird's average length is 26–28 cm (10–11 in), with a wingspan of 35–40 cm (14–16 in). They have relatively short, rounded wings and long, featherless legs. These birds are easily recognized by their top knots, which are shorter in the female. They have a brown face, gray breast, brown back and primaries, and heavily white barred underside. 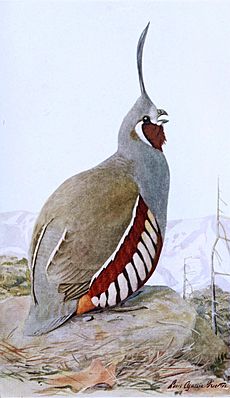 There are five recognized subspecies:

It inhabits mountainous chaparral west of the Rocky Mountains, from British Columbia in Canada, and some areas of Washington state in the United States, to Baja Peninsula, Mexico. It can be found up to 3,000 m (9,800 ft) above sea level. It is a non-migratory species; however some populations may be altitudinal migrants in some mountain ranges.

Mountain quail primarily move about by walking, and can move surprisingly quickly through brush and undergrowth. In the late summer, fall and winter, the adults and immature young congregate into family groups of up to 20 birds. The birds habits can be secretive. Any flight is usually short and explosive, with many rapid wingbeats followed by a slow glide to the ground.

Its diet consists primarily of plant matter and seeds. The chicks are decidedly more insectivorous than adults, gradually consuming more plant matter as they mature. 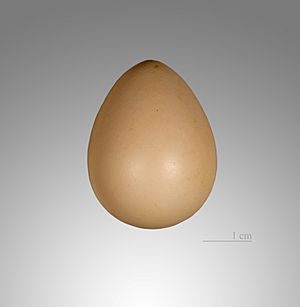 Breeding among mountain quail is monogamous, and rarely gregarious. The female typically lays 9–10 eggs in a simple scrape concealed in vegetation, often at the base of a tree or shrub, usually close to water. Incubation lasts from 21–25 days, usually performed by the female and rarely by the male. The chicks are precocial, leaving the nest with their parents within hours of hatching.

It is not considered threatened by the IUCN, being plentiful across a wide range. However, its success is tied to sufficient habitat, which expands in cooler and more arid climate. Subfossil remains have been found, for example at Rocky Arroyo in the Guadalupe Mountains and Shelter Cave, New Mexico, where sufficient habitat no longer exists. The bones date found from the end of the last ice age to not much more than 8000 BC.

All content from Kiddle encyclopedia articles (including the article images and facts) can be freely used under Attribution-ShareAlike license, unless stated otherwise. Cite this article:
Mountain quail Facts for Kids. Kiddle Encyclopedia.