Oswaldo Vigas (August 4, 1926 – April 22, 2014) was a Venezuelan artist, best known as a painter and muralist. His work includes painting, sculpture, prints, drawings, ceramics and tapestries. His artwork was created between France and Venezuela.

He has had over one hundred solo exhibitions and is represented in numerous public institutions and private collections around the world. He is predominantly recognized as a self-taught artist and painter.

Oswaldo Vigas was born in Valencia, Carabobo, Venezuela on August 4, 1926. He identified as mestizo, a term for a person of mixed indigenous and Spanish heritage. He started painting at age 12 when his father died, mostly paintings featuring the human body.

He went to college and studied medicine at the University of the Andes (Venezuela) (Universidad de los Andes) and at the Universidad Central de Venezuela in Caracas, hoping to be a pediatrician. He received a degree in 1951.

While studying, he took several art classes at the Taller Libre de Artes, and attended the Escuela de Artes Plásticas Cristóbal Rojas, where he became acquainted with painters like Manuel Cabré and Pedro Ángel González, among others.

His early paintings focus on the human figure. He took an interest in pre-Columbian cultures and pottery, specifically Venus de Tacarigua figurines.

The witch series of paintings won him three important art prizes in Venezuela. In 1952 he received the National Visual Arts Award for his painting La gran bruja (1951) and had a major solo exhibition at the Museo de Bellas Artes (Museum of Fine Arts) in Caracas. One of these prize granted him a plane ticket to Paris, where he relocated the same year, in 1952.

When Vigas arrived in Paris he studied at the École des Beaux-Arts and took open courses at the Sorbonne. While in Paris, he was commissioned to produce five mosaic murals that were to become part of the Universidad Central de Venezuela and declared a World Heritage Cultural Site by UNESCO in 2000.

During most of the 1950s, his works shifted away from the human figure towards constructivism and abstraction. 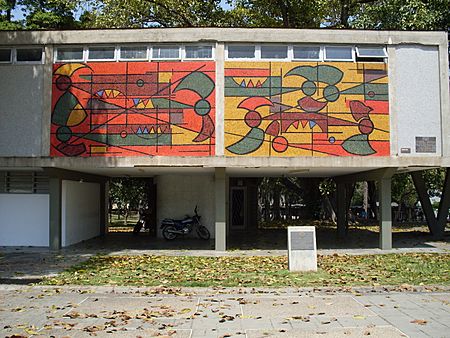 During the late 1950s to mid 1960s, while still living in France, Vigas was invited to participate at an important survey about Latin American art in which he was awarded first prize: the Gulf-Caribbean Art Exhibition, curated by Lee Malone at The Museum of Fine Arts, Houston.

He lived in Paris for twelve years and made many friends including Fernand Léger, Max Ernst, Wifredo Lam, and it's where he met Janine, his French born wife and lifelong companion.

In 1964 he moved back to Valencia, Venezuela, along with Janine, and continued to exhibit his work thoroughly throughout the country. 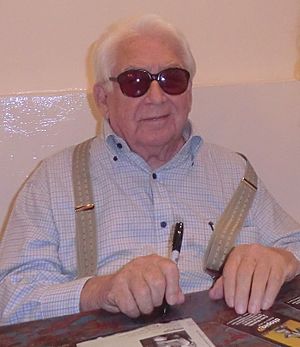 In 1990, the Museo de Arte Contemporáneo de Caracas Sofía Imber organized a major retrospective of his works, showcasing not only paintings and sculptures but also tapestries, ceramics and jewelry. Lagoven, the oil company and subsidiary of PDVSA, produced a documentary film about his work.

In 1992 the city of Monte Carlo honored him with the Prince Rainier Grand Prize, and the Monnaie de Paris, organized a large retrospective, Oswaldo Vigas, from 1952 to 1993, showcasing one hundred and thirty two works comprising paintings, ceramics and sculptures.

During his later years, Vigas continued to work and exhibit worldwide, gaining further international recognition. Oswaldo Vigas was one of the most prominent and prolific artists of his generation in Venezuela.

Vigas died on 22 April 2014 in Caracas, aged 87. His wife Janine Vigas and his son Lorenzo, (director, screenwriter and film producer) survive him.

Vigas received the International Association of Art Critics Award twice, in 2008 and 2014; in 2004, he was the recipient of the Latin Union Award in Washington, DC.

All content from Kiddle encyclopedia articles (including the article images and facts) can be freely used under Attribution-ShareAlike license, unless stated otherwise. Cite this article:
Oswaldo Vigas Facts for Kids. Kiddle Encyclopedia.