Thomas P. "Oyster" Burns (September 6, 1864– November 11, 1928) was an American baseball player. He played 11 seasons in Major League Baseball (MLB) for the Wilmington Quicksteps, Baltimore Orioles, Brooklyn Bridegrooms, and New York Giants. Burns mostly played as an outfielder. He also played as a shortstop, second baseman, third baseman and pitcher. Over his career he compiled a batting average of .300 with 1,392 hits, 65 home runs, and 834 runs batted in (RBI) in 1,188 games played. Burns spent most of his career in the major leagues. He also played in minor league baseball. He first played in MLB at age 19. In his playing days, Burns was 5 feet 8 inches (173 cm) tall and weighed 183 pounds (83 kg).

Burns was nicknamed "Oyster" because he sold oysters in the off-season. He was described as a "loudmouth" with "an irritating voice and personality". Burns led the Bridegrooms to an American Association championship in 1889 and a National League pennant in 1890. He retired from baseball in 1901. He died on November 11, 1928, in Brooklyn, New York.

Burns was born on September 6, 1864, in Philadelphia, Pennsylvania. His parents, Patrick and Mary Burns, both came to the United States from Ireland.

In 1883, Burns began his professional baseball career. He played as a pitcher for a minor league team in Harrisburg, Pennsylvania. In his first season, Burns had an earned run average (ERA) of 2.30, and pitched in 20 games. When he was not pitching, Burns played second and third base. 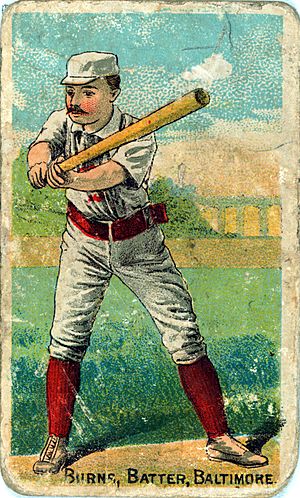 Burns batting for the Orioles in 1887

Burns began the 1884 season playing for the Wilmington Quicksteps. He left the team on August 21, 1884, after they joined the Union Association. On the same day, Burns joined the Baltimore Orioles. At the age of 18, he was the youngest player on the Orioles. Burns played in only 35 games that season but had six home runs. He hit more home runs than any other player on the team that season. In 1885, he batted .231 with five home runs and 37 RBIs. Burns pitched to a 7–4 win–loss record. His low batting average, however, led him to be demoted to the Newark Domestics for the 1886 season. Burns helped the Domestics win the Eastern League pennant. By 1887, he returned to playing in the majors for the Orioles. He became the Orioles' team captain. Burns lost the role when he threw a baseball at a pitcher on another team. He was later fined $25.

Over the 1887 season, Burns hit nine home runs. He had 19 triples, which was tied with five other players for the American Association lead. He played in 140 games, which also tied for the league's lead.

After playing in 79 games for Baltimore, Burns was moved to the Brooklyn Bridegrooms by Harry Von der Horst. Von der Horst owned both teams. While playing for the Bridegrooms, the New York Clipper described Burns as "the noisiest man that ever played on the Brooklyn team. His voice reminds one of a buzz-saw." Burns remained with the Bridegrooms for the 1889 season. He had team highs in batting average and home runs. That season the Bridegrooms became American Association champions. In the World Series, the Bridegrooms played the New York Giants. Burns hit a three-run home run to win the fourth game of the series. This gave Brooklyn a 3–1 series lead. However, the Giants won the World Series after winning five straight games.

In 1890, the Bridegrooms moved to the National League. Burns, then 26, led the league in home runs (13) and RBIs (128). He hit for the cycle on August 1, 1890. He was the first Bridegroom to do so. The Bridegrooms won the National League pennant. In the 1890 World Series, the team played against the Louisville Colonels. The series ended in a 3–3–1 tie because of bad weather. In 1892, the Bridegrooms changed their name to the Grooms. Burns's RBI total was third highest in the league. His hits, doubles, triples, and batting average were the second highest on the Brooklyn team. In 1893, between games of a doubleheader, a teammate of Burns, Tom Daly, was sleeping in center field. Burns stabbed Daly with a knife. Daly woke up and turned into the knife. This led to a severed tendon which kept Daly out for two weeks. Burns' 1894 batting average (.355) was the highest of his career. He continued to play for the club until 1895, when he left the Grooms to play for the New York Giants. In his final MLB year, Burns batted .258 over 53 games.

After the 1895 season, Burns' contract was bought by the minor league Newark Colts. The Colts won the Atlantic League division with a 82–61 record. The next season, Burns served as a player-coach for the Hartford Bluebirds. He lead the team in doubles and batting average. In his final year managing, Burns coached for a minor league team in Portland, Maine.

After retiring from baseball, Burns lived in Brooklyn. He died on November 11, 1928. He was buried in Holy Cross Cemetery in North Arlington, New Jersey.

All content from Kiddle encyclopedia articles (including the article images and facts) can be freely used under Attribution-ShareAlike license, unless stated otherwise. Cite this article:
Oyster Burns Facts for Kids. Kiddle Encyclopedia.