The Pánuco River (Spanish: Río Pánuco), also known as the Río de Canoas, is a river in Mexico fed by several tributaries including the Moctezuma River and emptying into the Gulf of Mexico. The river is approximately 510 kilometres (320 mi) long and passes through or borders the states of Mexico, Hidalgo, Querétaro, San Luis Potosí, Tamaulipas, and Veracruz. Since one of the headwaters of the Moctezuma River is the Tula River, the Pánuco ultimately drains the Valley of Mexico containing Mexico City. 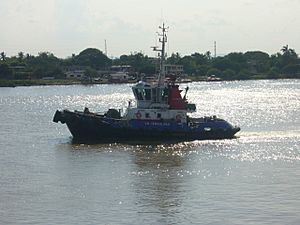 Boat on Pánuco River at Tampico

Near its source, the Pánuco serves as a drainage channel for Mexico City. From there, it becomes the state border between Hidalgo and Querétaro as it moves toward San Luis Potosí. It takes the name Río Pánuco only upon reaching the state of Veracruz. It empties into the Gulf of Mexico at Tampico and Ciudad Madero, where it forms the border between the states of Tamaulipas and Veracruz. The Tampico Bridge crosses the river near its mouth on the Gulf.

In total, the Pánuco is more than 500 km in length, though only the last 15 km is navigable for larger ships. According to the Atlas of Mexico, it is the fourth-largest river in Mexico by volume of runoff, and forms the sixth-largest river basin in Mexico by area. The complete watershed of the Pánuco and its tributaries drains portions of Tamaulipas, San Luis Potosí, Guanajuato, Querétaro, Hidalgo, Mexico, Puebla, and Veracruz.

In 1519, during his cartographic expeditions along the western coast of the Gulf of Mexico, Spanish explorer Alonso Álvarez de Pineda established a settlement on the river, which he named Las Palmas, though it was abandoned after he was killed in battle with indigenous peoples living nearby. 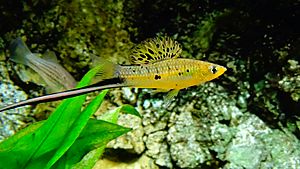 All content from Kiddle encyclopedia articles (including the article images and facts) can be freely used under Attribution-ShareAlike license, unless stated otherwise. Cite this article:
Pánuco River Facts for Kids. Kiddle Encyclopedia.