The day celebrates the adoption of the Pakistan resolution by the Muslim League at the Minar-e-Pakistan (lit. Pakistan Tower) that called for establishing an independent federation comprising provinces with Muslim majority located in north-western and north-eastern region of British controlled territories in India (excluding autonomous princely States) on 23 March 1940. On this day a resolution was passed saying that Muslims in India wanted independence and separate homeland and they were persecuted in India. Since then, the day is celebrated annually throughout the country as a public holiday. The Pakistan Armed Forces usually hold a military parade to celebrate the event. 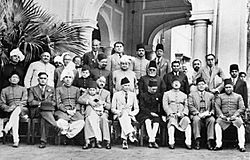 Group photo of Muhammad Ali Jinnah (in centre) and some of the Founding Fathers of Pakistan in Lahore, c. 1940.

The Muslim League held its annual session at Minto Park in Lahore, Punjab, that lasted from 22 to 24 March 1940. During this event, the Muslim League led by Muhammad Ali Jinnah and other Founding Fathers narrated the events regarding the differences between Hindus and Muslims, and introduced the historical resolution that cemented the formation of a nation-state in South Asia as Pakistan, even though it did not actually mention Pakistan at all.

The resolution was moved by Abul Kashem Fazlul Huq (Abul Kashem Fozlul Hôk) (26 October 1873 – 27 April 1962), often called Sher-e-Bangla, passed on 24 March and had its signatures from the Founding Fathers of Pakistan. It reads as:

[Quoting Resolution:] No constitutional plan would be workable or acceptable to the Muslims unless geographical contiguous units are demarcated into regions which should be so constituted with such territorial readjustments as may be necessary. That the areas in which the Muslims are numerically in majority as in the North-Western and Eastern zones of India should be grouped to constitute independent states in which the constituent units shall be autonomous and sovereign.

The British plan to partition Indian subcontinent into two dominion- India and Pakistan was announced on 3 June 1947. In the event Pakistan was created on 14 August 1947 and Indian independence came a day later. Pakistan was immediately identified as migrant state born amid bloodshed. Muhammad Ali Jinnah the founder of Pakistan became first Governor General of Pakistan and Mr. Liaqat Ali Khan, The first Prime Minister of Pakistan. The Indian Act of 1935 provided the legal framework for Pakistan until 1956, when the state passed its own constitution. While Pakistan's Independence Day celebrates its freedom from British Rule, the Republic Day celebrates of coming into force of its constitution.

Works and efforts by Basic Principles Committee drafted the basic outlines of the constitution in 1949. After many deliberations and years of some modifications, the first set of the Constitution of Pakistan was enforced in the country on 23 March 1956. This marked the country's successful transition from Dominion to Islamic Republic. The Governor-General was replaced with President of Pakistan as ceremonial head of state.Initially it was called Republic day but after Ayub Khan's takeover its name was changed to Pakistan day due to the end of democracy in Pakistan.

The main celebration is held in Islamabad, the capital of Pakistan. The President of Pakistan is usually the Chief Guest; also the attended in public are Prime Minister of Pakistan alongside the Cabinet ministers, military chiefs of staff, and chairman joint chiefs.

A full inter-services joint military parade is rehearsed and broadcast live by the news media in all over the country. Pakistan military inter services also shows a glance of its power and capabilities during this parade.

The celebrations regarding the holiday include a full military and civilian parade in the capital, Islamabad. These are presided by the President of Pakistan and are held early in the morning. After the parade, the President confers national awards and medals on the awardees at the Presidency. Wreaths are also laid at the mausoleums of Muhammad Iqbal and Muhammad Ali Jinnah founder of Pakistan. In very rare times and significance, foreign dignitaries have been invited to attend the military parade.

All content from Kiddle encyclopedia articles (including the article images and facts) can be freely used under Attribution-ShareAlike license, unless stated otherwise. Cite this article:
Pakistan Day Facts for Kids. Kiddle Encyclopedia.