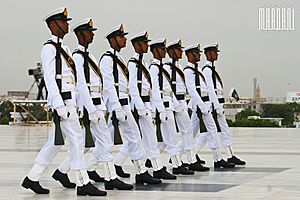 The Pakistan Armed Forces (Urdu: پاک عسکری) are the overall unified military forces of Pakistan. The Pakistani military was first formed when the nation achieved independence from the United Kingdom in 1947.

Its component branches are:

Approximately 620,000 people are on active duty in the military which is the world's 7th largest armed force as of 2007. Combined with the 302,000 strong Paramilitary forces and the Coast Guard, the Military of Pakistan has a total size of nearly 1,000,000 people.

All content from Kiddle encyclopedia articles (including the article images and facts) can be freely used under Attribution-ShareAlike license, unless stated otherwise. Cite this article:
Pakistani military Facts for Kids. Kiddle Encyclopedia.