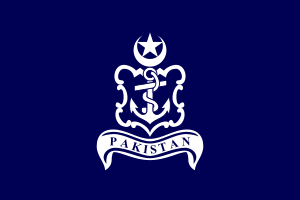 Pakistan Navy (Urdu: پاک بحریہ) is the naval branch of the military of Pakistan. It is responsible for Pakistan's 1,046 kilometres (650.0 mi) coastline along the Arabian Sea and the defence of important harbours. It is a modern and highly dependable force that operates a wide range of ships ranging from cruisers to destroyers as well as submarines. Navy day is celebrated on September 8 in commemoration of the Indo-Pakistani War of 1965.

All content from Kiddle encyclopedia articles (including the article images and facts) can be freely used under Attribution-ShareAlike license, unless stated otherwise. Cite this article:
Pakistan Navy Facts for Kids. Kiddle Encyclopedia.