Palm Cove is a coastal suburb of Cairns in the Cairns Region, Queensland, Australia. It is 27 kilometres (17 mi) north of the city of Cairns. It is named after the palm trees that line the beach.

Shortly before World War I in 1918, the land that is today Palm Cove was bought by Albert Veivers from Archdeacon Campbell. Archdeacon Campbell had been known as a priest at Cairns church who experimented with bringing different agricultural crops to the Cairns region. Veivers was important in the advancement of Palm Cove by having the first road built. The creation of the road led property values in Palm Cove to increase dramatically, leading to more prosperity for the community. Shortly after World War II, in which Palm Cove was used as a training base for Australian soldiers, the number of people traveling to Palm Cove greatly increased. The opening of the Ramada Reef Resort in 1986 marked the first international hotel chain to be located in Palm Cove and the town has continued to increase in national and international recognition ever since.

Palm Cove is located in Far North Queensland on the Australian coast. Arlington Reef is the closest section of The Great Barrier Reef to Palm Cove being around 30 km offshore. The reef shelters the inshore waters from the Coral Sea swells creating relatively calm waters between the reef and the beach. To the west of Palm Cove is the Macalister Range National Park which is part of the Wet Tropics World Heritage area.

The major industry for Palm Cove is tourism. Palm Cove is also a tourist destination due to its proximity to the Great Barrier Reef and the Daintree Rainforest. Palm Cove is the location of many world-renowned resorts and hotels such as the Drift Resort, Alamanda, the Mantra Amphora Resort, Peppers Beach Club, and the Reef House. 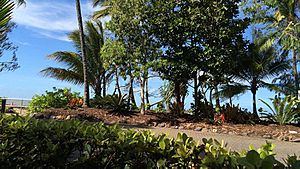 The pristine beaches and Palm tree lined paths are used by joggers, walkers and cyclists and netted life guard patrol swimming enclosures offer safe access to the sea all year round. The Palm cove jetty is one of the regions most popular fishing spots where anglers regularly catch species such as mackerel, Giant Trevally or "G.T's" and shark.

All content from Kiddle encyclopedia articles (including the article images and facts) can be freely used under Attribution-ShareAlike license, unless stated otherwise. Cite this article:
Palm Cove, Queensland Facts for Kids. Kiddle Encyclopedia.