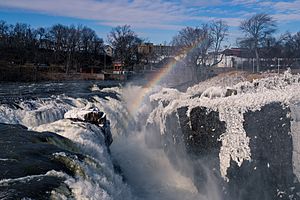 The Great Falls in January 2019 with a characteristic rainbow.

The Great Falls of the Passaic River is a prominent waterfall, 77 feet (23 m) high, on the Passaic River in the city of Paterson in Passaic County, New Jersey, United States. The falls and surrounding area are protected as part of the Paterson Great Falls National Historical Park, administered by the National Park Service. The Congress authorized its establishment in 2009.

One of the United States' largest waterfalls, it played a significant role in the early industrial development of New Jersey starting in the earliest days of the nation. It is part of the Great Falls of Paterson–Garret Mountain National Natural Landmark. It has also been designated as a National Historic Landmark District since 1976. The Great Falls' raceway and power systems were designated an Historic Civil Engineering Landmark in 1977.

Geologically, the falls were formed at the end of the last ice age approximately 13,000 years ago. Formerly the Passaic had followed a shorter course through the Watchung Mountains near present-day Summit. As the glacier receded, the river's previous course was blocked by a newly formed moraine. A large lake, called Glacial Lake Passaic, formed behind the Watchungs. As the ice receded, the river found a new circuitous route around the north end of the Watchungs, carving the spectacular falls through the underlying basalt, which was formed approximately 200 million years ago.

The falls later became the site of a habitation for Lenape Native Americans, and later for Dutch settlers in the 1690s. 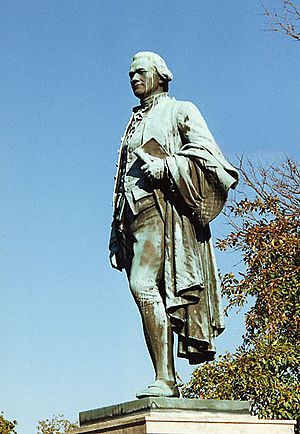 Statue of Hamilton overlooking the falls

In 1778, Alexander Hamilton visited the falls and was impressed by its potential for industry. Later when Hamilton was the nation's Secretary of Treasury, he selected the site of the nation's first planned industrial city, which he called a "national manufactory." In 1791, Hamilton helped found the Society for the Establishment of Useful Manufactures (S.U.M.), state-chartered private corporation to fulfill this vision. The town of Paterson was founded by the society and named after New Jersey Governor William Paterson in appreciation of his efforts to promote the society.

Hamilton commissioned civil engineer Pierre Charles L'Enfant, responsible for the layout of the new capital at Washington, D.C., to design the system of canals known as raceways supplying the power for the watermills in the new town. As a result, Paterson became the nucleus for a burgeoning mill industry. In 1792, David Godwin was commissioned to build the first water-powered cotton spinning mill in New Jersey. He subsequently built the first dam on the falls; it was a structure made of wood. In 1812, it was the site of the state's first continuous roll paper mill. Other products whose construction used the falls as a power source include the Rogers Locomotive Works (1832), the Colt revolver (1837), and the USS Holland (SS-1) (1898). The oldest extant structure in the historic district is the Phoenix Mill, built in 1813. The industrial area also became the site of labor unrest, as it was a center for the 1913 Paterson silk strike. Immigrant workers, facing harsh conditions in factories staged numerous strikes, giving the United States its first organized labor movement. 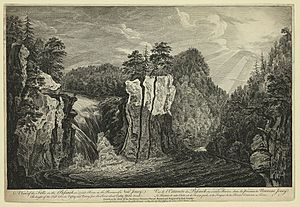 The society continued operation until 1945 when its charter and property were sold to the city of Paterson. The area fell into disuse with the steep decline of industry in the region during the 20th century. In 1971, the Great Falls Preservation and Development Corporation was established to restore and redevelop the historic mill buildings and raceways.

The State of New Jersey announced plans for a new urban state park in Paterson surrounding the Great Falls, called Great Falls State Park, in 2007. The master plan for the park called for utilizing surrounding industrial areas for parklands that include a trail network and recreation areas, and creating new areas to view the falls. These plans were superseded by the establishment of Great Falls National Historical Park (see below). 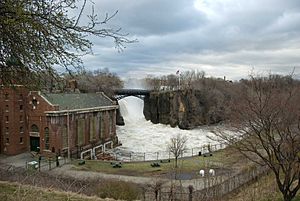 The Falls are viewable from Haines Overlook Park on the south and Mary Ellen Kramer Park on the north. Drive-by viewing is available from McBride Avenue where it crosses the river just above the Falls. A footbridge over the Falls gorge (historically, the eighth such bridge to span this chasm) also serves as an outlook point. A visitor's center at the corner of Spruce and McBride Avenues, in the Great Falls Historic District, provides a historical overview of the falls and the industrial and cultural history of Paterson. A record 177,000 visitors went to see the Great Falls in 2016. 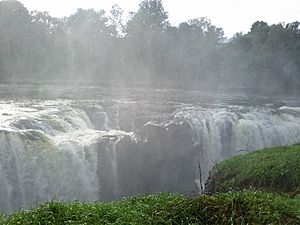 The falls after Hurricane Irene. 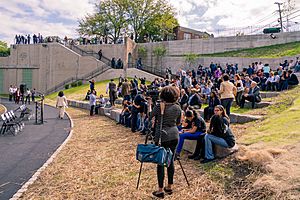 The new amphitheater opened in October 2018 at Overlook Park.

The Great Falls of Paterson – Garret Mountain is a National Natural Landmark designated in January 1967 and were expanded in April 1967 to include nearby Garret Mountain. Together they help demonstrate how jointed basaltic lava flow shaped the geology of the area during the Early Mesozoic period through both extrusion and intrusion. The designation protects the site from federal development, but not from local and state development. Redevelopment of the decayed adjacent industrial areas has been an ongoing controversial topic. An attempt in the 1990s to redevelop the adjacent Allied Textile Printing Co. (ATP) facility, destroyed by fire in the 1980s, into prefabricated townhouses was initially approved by the city but later repelled by a coalition of local citizens seeking to preserve the historic character of the district.

Paterson Great Falls National Historical Park was authorized to be added to the National Park System of the United States under the Omnibus Public Land Management Act. On March 30, 2009, President Obama signed legislation authorizing the falls as a national historical park, which would provide additional federal protections for the 77-foot waterfall. By 2011, Great Falls State Park and other land along the Passaic River were transferred to the federal government for the creation of the park. Formal establishment as a unit of the National Park System required action by the Secretary of the Interior, which took place November 7, 2011, when Secretary Salazar formally accepted lands on behalf of the United States, and dedicated the park as the nation's 397th park system unit.

The hydroelectric plant at the falls is operated by Eagle Creek Renewable Energy, which is considering commissioning another facility downstream at the Dundee Dam.

All content from Kiddle encyclopedia articles (including the article images and facts) can be freely used under Attribution-ShareAlike license, unless stated otherwise. Cite this article:
Great Falls (Passaic River) Facts for Kids. Kiddle Encyclopedia.