Kids Encyclopedia Facts
This page is about the town. For the breed of sheep, see Whitefaced Woodland.
Not to be confused with Peniston.

Penistone (/ˈpɛnᵻstən/ PEN-is-tən) is a market town and civil parish in the Metropolitan Borough of Barnsley, South Yorkshire, England, which had a population of 22,909 at the 2011 Census. Historically in the West Riding of Yorkshire, it is 8 miles (13 km) west of Barnsley, 17 miles (27 km) north-east of Glossop, 14.2 miles (23 km) north-west of Sheffield, and 29 miles (47 km) east of Manchester in the foothills of the Pennines. The highest point, Hartcliffe Tower, is 1,194 ft (364 m) above sea level and has views over the Woodhead bypass and the Dark Peak. The surrounding countryside is predominantly rural with farming on rich well-watered soil on mainly gentle slopes rising to the bleak moorland to the west of the town. Dry stone walls, small hamlets and farms surrounded by fields and livestock are synonymous with the area. The area is known for its rugged breed of sheep, the Whitefaced Woodland. The Market town itself stands at its highest point around St Johns Church at around 250 m (820 ft) above Sea Level. However, the surrounding land rises well over 1,000 ft (300 m) towards Cubley and Thurlstone Moors and out towards smaller Hamlets at Carlecotes, Victoria, Dunford, and Crow Edge, elevated at points above 1,200 ft (370 m). All parts of rural Barnsley are very rugged and picturesque, some have even been used for the filming of Last of The Summer Wine episodes over the years. There are several vantage points that afford tremendous panoramic views of the surrounding areas of West Yorkshire and North Derbyshire. 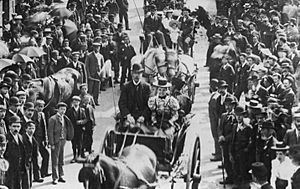 The place-name 'Penistone' is first attested in the Domesday Book of 1086, where it appears as Pengestone and Pangeston. Penistone is situated on a high ridge, which is believed to be the source of its name. Penistone derives from penn in Old Welsh, which means head, end, top, height or hill, and the Old English ing, a place-name forming suffix and tun, an enclosure, farmstead, village or estate. It most likely means a farm or village at or called Penning. It has frequently been noted on lists of unusual place names.

In 1066 the township was owned by Ailric. After the Norman Conquest it was razed to the ground in 1069 in the Harrying of the North; the Domesday Book described the settlement in 1086 as "waste".

Sir Gyles Penyston (fl. 13th century), whose family seat was in Cornwall (perhaps at Truro) before his time, and who is an ancestor of the Penyston Baronets, was styled of Penyston, denoting that he resided in Penistone.

Sheep sales have been held in the town since before 1699, when the market received a royal charter, and the area produced the now rare Penistone sheep.

The town remained small until the coming of the railway in 1845, although several pre-19th century buildings survive. The oldest still standing is 'Penistone Church'. This is the Grade I listed mediaeval parish church, St. John the Baptist Church. The White Hart pub in the town dates from 1377. Penistone had a market for a long time before its royal charter was granted in 1699, although its historic livestock market was closed recently to make way for town centre re-development. A new landmark building has been built in Penistone for the Market Place. This is an oaken 'Cruck Barn' and was built by Carpenter Oak of Totnes, Devon. 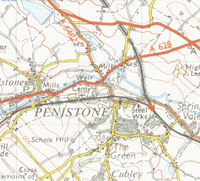 A map of Penistone from 1954 that shows the railway

The Manchester, Sheffield and Lincolnshire Railway via Penistone, Dunford Bridge and the three-mile Woodhead Tunnel opened on 15 July 1845. Construction conditions were difficult and 32 men died during the tunnel's construction and 28 died of cholera. In 1849, Penistone's 29-arch viaduct was built by Messrs Ingham and Bower. Stone was obtained from Walk Mill Bank, Oxspring, and conveyed by a tramway on the side of the River Don. The Penistone to Huddersfield Railway Line opened on 1 July 1850. The second and third arches of Penistone Viaduct collapsed on 2 February 1916 when heavy rain weakened the foundations. The driver and fireman of a stationary goods locomotive were able to jump clear and survive the collapse. Cracks in the parapet had been observed some days earlier. The viaduct was repaired and in service in August of the same year.

Penistone became a railway junction with a depot for engineering trains. Penistone station had frequent trains to Manchester, Sheffield and Huddersfield but after the Beeching cuts, passenger trains on the Woodhead Line to Manchester finished. Goods trains continued until the line closed and much of the railway infrastructure was removed. The town's station is served by Huddersfield-Sheffield trains on the "Penistone Line".

The town was served by the Woodhead Line between Manchester (Piccadilly) and Sheffield (Victoria) via the Woodhead Tunnel. Penistone railway station was served by express passenger trains. Following major investment (started in 1935 but delayed by the Second World War), the electrification of the railway was completed in 1954 and the line's power control centre was built adjacent to Penistone railway station. The building stands and has been converted to commercial use. The Woodhead Line was the first main line railway in the UK to be electrified, but its once-pioneering 1500 V DC system became non-standard. Penistone railway station lost its Woodhead Line passenger trains on 5 January 1970, but goods trains (mainly coal) continued for a further 11 years. The line was controversially closed between Penistone and Hadfield in 1981 and the track lifted several years later. The route of the track is now used as part of the Trans-Pennine Trail.

Plans to re-open parts of the Woodhead line as the Don Valley Railway between Sheffield to Deepcar/Stocksbridge could reduce travel time to Sheffield.

Penistone is situated on the south bank of the River Don. The parish, which included Gunthwaite, Hunshelf, Ingbirchworth, Langsett, Oxspring, and Thurlstone, covered 21,338 acres mostly arable land and pasture and 2,000 acres of moorland. The underlying geology is the coal measures of the South Yorkshire Coalfield from which some coal was mined in the 19th century and sandstone flags were quarried. 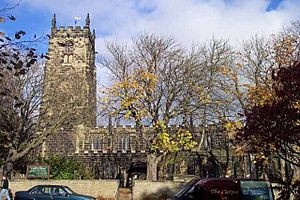 Penistone Show is an annual agricultural show that draws in crowds from across the county. It is thought to be the biggest one-day show in Yorkshire and is held on the second Saturday in September. As well as ordinary agricultural categories for sheep, cows, goats, and chickens entries are received in horticulture, handicraft, show jumping, pigeons, dogs, photography and many more categories.

The annual 'Penistone Mayor's Parade Weekend' has become established as an important time on Penistone's June calendar. The Saturday has two music events on the showground: a concert of light music in the afternoon and an evening rock concert. On the Sunday, a major parade and gala takes place. The parade goes through the middle of Penistone and the gala takes place on the showground.

The first Penistone Folk Festival occurred in June 2011 in the then new Market Barn. It was one of the first public ventures to happen in the new building. This is now set to be an annual charity event and occurs at around the same date as the earlier 'Penistone Sing', on the festival of St John, after whom the local parish church is dedicated.

Penistone's Annual Competitive Music Festival is hosted by Penistone Grammar School on the last Saturday of September each year, Registered Charity No. 511148. The event was founded by Millhouse Green Male Voice Choir and was in its 48th year in 2016.

Penistone Literary Festival ('Pen-Lit') was started in 2014 and has attracted some well-known authors and personalities. The 2016 event had 18 speakers, which included ex-MP and popular radio personality, Gyles Brandreth, and the singer/comedian, Mike Harding.

On Yorkshire Day, 1 August 2006, Penistone played host to the now annual gathering of lord mayors, mayors and other civic heads from Yorkshire. The day was marked with a service at Penistone Parish Church, a parade around the town and a meal for invited guests at Penistone Grammar School. Other events included free films and an evening of music at the Paramount Cinema, an exhibition at St John's Community Centre and Hartcliff Tower was open to the public again. There were Morris dancers, a farmers' market, a shop window competition and an historic organ concert at St. Andrew's Church. The day was taken seriously by its organisers and some of the roads on the procession route were resurfaced for the event.

On 26 February 2007 the town was officially declared a Fairtrade Town.

All content from Kiddle encyclopedia articles (including the article images and facts) can be freely used under Attribution-ShareAlike license, unless stated otherwise. Cite this article:
Penistone Facts for Kids. Kiddle Encyclopedia.