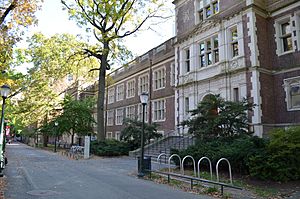 The Perelman School of Medicine (Penn Med), is the medical school of the University of Pennsylvania. It is an Ivy League school located in Philadelphia, Pennsylvania. Opened in 1765, Penn Med is the first and oldest medical school in the United States. Today, the Perelman School of Medicine is a chief place of biological and medical research and education. It is one of the country's top medical schools. The school ranks among the highest recipients of the National Institutes of Health research awards.

The School of Medicine's professors were known internationally. Some of these were: Benjamin Rush, Philip Syng Physick, Robert Hare, William pepper, and Joseph Leidy. In 1847, a convention of medical doctors started the American Medical Association. The first President was Nathaniel Chapman, a professor at the School.

All content from Kiddle encyclopedia articles (including the article images and facts) can be freely used under Attribution-ShareAlike license, unless stated otherwise. Cite this article:
Perelman School of Medicine at the University of Pennsylvania Facts for Kids. Kiddle Encyclopedia.