Pittsfield was initially settled by settlers from New England. These settlers were of old Yankee stock, that is to say they were descended from the English Puritans who had founded and settled New England in the 1600s. A group of settlers from Pittsfield, Massachusetts headed west and settled this region of Illinois in 1820. When they arrived the area was a virgin wilderness, they constructed farms, roads and government buildings. Pittsfield was home to John Hay, Lincoln's personal secretary, ambassador to England under President William McKinley, later Secretary of State for Theodore Roosevelt and creator of the Open Door Policy. As county seat, the town was one of the various places in central Illinois where Abraham Lincoln practiced law as part of the circuit court, working on 34 cases between 1839 and 1852. One local newspaper, now known as the Pike Press, was then owned by another of Lincoln's future secretaries, John Nicolay, and featured an editorial containing one of the first known suggestions of Lincoln as the Republican nominee for the presidency.

Pittsfield is the self-proclaimed "Pork Capital" of the Midwest, owing to the long history of pork production in the region, which fed into the large meat-packing industry of Chicago. Though agriculture in the region is no longer so dependent on pork, the town still hosts a yearly "Pig Days" festival.

The local high school football team, the Saukees, still holds the record for longest winning streak in the state. Starting with their season opening 6-0 win over North Greene in 1966, the Pittsfield Saukees reeled off 64 consecutive wins, which included 15 straight shutouts between 1969 and 1971. The streak extended all the way through to the second game of the 1973 season, when Pittsfield dropped a 12-0 decision to Winchester, Illinois.

Pittsfield is the setting for Jamie Gilson's book Hello, My Name is Scrambled Eggs. Singer/songwriter Sufjan Stevens wrote a song about Pittsfield on his album The Avalanche. 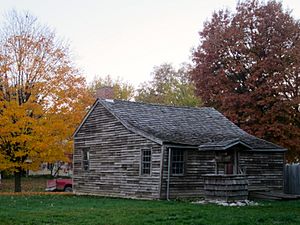 The Shastid House, one of the historic buildings in Pittsfield.

There are many historic landmarks within the city limits, the most notable of which is the Pike County Courthouse. The courthouse was built in 1894 by Robert Franklin, a master mason who designed and supervised the keystone architecture of this courthouse. It was the third courthouse in the town, but the fourth in Pike County. The courthouse is fashioned of Cleveland sandstone, and is widely recognized as one of the most beautiful courthouses in the state and the midwest.

The East Ward School, built between 1861 and 1866, was designed by Architect John M. Van Osdel, who also designed the Palmer House in Chicago, as well as the Governor's Mansion in Springfield. John Houston of Griggsville built the school for the contract price of $35,000, which was financed by bonding. The building is stone (boated from Joliet on the Illinois river) and brick burned in Pittsfield. Both the grade school and high school were located in this building. Its large clock and bell were donated by Colonel Ross and mounted in the tower. The school closed in 1955 and was unoccupied until 1978 when it was renovated and became the home of the Pike County Historical Society and the Pike County Historic Museum.

There are nine homes still in existence in Pittsfield that are connected to Abraham Lincoln, including the Shastid House, where Lincoln often stayed while practicing cases in the county.

Pittsfield's drinking water supply is provided by Lake Pittsfield, an artificial reservoir held in by an earth and concrete dam. The 200-acre (0.81 km2) lake is located within a 680-acre (2.8 km2) park that has become a prime recreational area offering boating, fishing, RV and primitive camping, hiking, and other outdoor activities.

Pittsfield, along with the bulk of Pike County, is located in the land between the Illinois and Mississippi rivers as they move toward convergence in St. Louis. The land is riddled with streams and bottom lands mostly draining through the McGee Creek drainage basin into the Illinois River. Thus, the land around Pittsfield and Pike County is much more hilly and forested than the rest of the plains of central Illinois. This geography, combined with a relative lack of heavy development, make the areas around Pittsfield particularly suited to wildlife. Pittsfield regularly attracts large numbers of out-of-state game hunters, and Pike county consistently leads all other Illinois counties in the number of deer harvested during fall hunting seasons.

There were 1,805 households out of which 25.8% had children under the age of 18 living with them, 52.5% were married couples living together, 8.0% had a female householder with no husband present, and 37.6% were non-families. 34.9% of all households were made up of individuals and 21.6% had someone living alone who was 65 years of age or older. The average household size was 2.22 and the average family size was 2.86.

All content from Kiddle encyclopedia articles (including the article images and facts) can be freely used under Attribution-ShareAlike license, unless stated otherwise. Cite this article:
Pittsfield, Illinois Facts for Kids. Kiddle Encyclopedia.