Pohlern is a municipality in the administrative district of Thun in the canton of Bern in Switzerland.

Until the Late Middle Ages Pohlern was virtually uninhabited forest in the Herrschaft of Strättligen. During the 14th century it was gradually settled under the rule of the Freiherr von Burgistein. By 1417 the Barfüsser (Franciscan mendicant) monastery in Bern owned some land and rights in the village. In 1459 it was combined with Uebeschi to form the Herrschaft of Pohlern. In 1499 and further in 1516 the Bernese patrician May family acquired parts of the village. In 1528 Bern adopted the new faith of the Protestant Reformation and suppressed all the monasteries, including the Barfüssers. Bern took over Pohlern and dissolved the Herrschaft. Pohlern became part of the court of Amsoldingen in the Thun District, where it remained until the district was dissolved in 2009. Today most residents either work in agriculture or commute to jobs outside the municipality.

For most of its history, the village was part of the parish of Thierachern. In 1922 it was assigned to the nearby parish of Blumenstein, with which it also shares a school house. 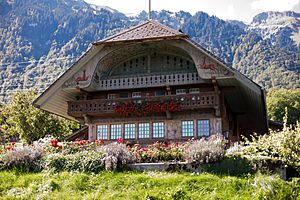 From the same survey, housing and buildings made up 0.8% and transportation infrastructure made up 1.0%. A total of 39.3% of the total land area is heavily forested and 3.0% is covered with orchards or small clusters of trees. Of the agricultural land, 3.4% is used for growing crops and 13.7% is pasturage and 20.0% is used for alpine pastures. All the water in the municipality is flowing water. Of the unproductive areas, 9.9% is unproductive vegetation and 4.4% is too rocky for vegetation.

It lies on the northern side of the Stockhorn mountains in the lower end of the Stockental valley. Like most of the canton of Bern, it is German-speaking.

On 31 December 2009 Amtsbezirk Thun, the municipality's former district, was dissolved. On the following day, 1 January 2010, it joined the newly created Verwaltungskreis Thun.

All content from Kiddle encyclopedia articles (including the article images and facts) can be freely used under Attribution-ShareAlike license, unless stated otherwise. Cite this article:
Pohlern Facts for Kids. Kiddle Encyclopedia.