Ponte Tresa is a municipality in the district of Lugano in the canton of Ticino in Switzerland.

Ponte Tresa is first mentioned in 818 as ad Tresiae Pontem, though this comes from a 12th Century copy of the earlier document. In 875 it was mentioned as Ponte Tretia. In German it was known as Treisbruck, though this name is no longer used.

The history of the town is closely tied to the Tresa river crossing, which was first mentioned in 590 by Gregory of Tours. The name of the municipality, and the neighboring, Italian town of Lavena Ponte Tresa, both come from the river. From the Middle Ages until the opening of the Melide dam in 1847, the municipality provided strategically important connections to Italy. Even in the Roman era there was probably a bridge or a ford across the river near the modern village. During the Middle Ages and into the early modern era, the bridge was a wooden bridge with stone pillars. Below the bridge there were fish ponds, which were mostly stocked with eels that belonged to the Bishop of Milan. In the 16th Century the bridge was in the possession of local noble families. Until 1828, it remained the property of the de Stoppani family, and then it was purchased by the Canton. The Canton built a new stone bridge in 1846. The current bridge dates from 1962.

At Rocchetta, in the area above the town, lie the ruins of the Comacine masters castle of S. Martino, which was destroyed in the war between Como and Milan(1118–27). During the Middle Ages, Ponte Tresa enjoyed certain responsibilities and privileges in connection with border control, tolls and upkeep on the bridge. The Duke of Milan granted the village a tax exemption, which was confirmed by the Swiss Confederation in the 15th Century.

The village church belong to the parish of Lavena Ponte Tresa until 1821 when it became an independent parish. The church of S. Bernardino dates from the 15th Century, and was renovated in 1972-82.

The railway Lugano-Ponte Tresa was inaugurated in 1912. 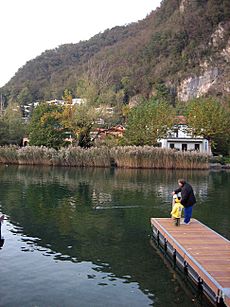 Of the built up area, housing and buildings made up 31.7% and transportation infrastructure made up 9.8%. while parks, green belts and sports fields made up 4.9%. Out of the forested land, all of the forested land area is covered with heavy forests. Of the agricultural land, 2.4% is used for growing crops and 31.7% is used for alpine pastures. All the water in the municipality is flowing water.

The municipality is located in the Lugano district, on Lake Lugano along the Swiss-Italian border, about 12 km (7.5 mi) from Lugano. The neighboring Italian town is called Lavena Ponte Tresa.

All content from Kiddle encyclopedia articles (including the article images and facts) can be freely used under Attribution-ShareAlike license, unless stated otherwise. Cite this article:
Ponte Tresa Facts for Kids. Kiddle Encyclopedia.