Positivism is the belief that human knowledge is produced by the scientific interpretation of observational data.

The approach has been an ongoing "theme in the history of western thought from the Ancient Greeks to the present day". The thought was created in the early 19th century by the philosopher and founding sociologist, Auguste Comte.

Comte, a sociologist, believed in a three part model of human knowledge. He claimed that it had gone through the phases of a religious and metaphysical worldview before the scientific interpretation was considered. The positivistic method should, said Comte, no longer aim at a revelation of ultimate causes. It should rather focus on how data are linked together. Scientists would simply interpret these correlations. All human knowledge could only be relatively true, so Comte with a look at these interpretations. Late 19th-century philosophers of the sciences from Heinrich Hertz to Ernst Mach eventually discussed specific requirements of operable scientific theories and physical laws such as the predictability of results in experiments and the functionality of laws in computations.

In its strongest original formulation, positivism could be thought of as a set of five principles:

Unlike materialists positivists do not make any claims about a primary substance such as matter. They assume that we have data and that we interpret the data. The idea of a material world with three dimensions is, for positivists, just a good model to handle the experiences of everyday life. If astronomy has to deal with more complex data that cannot be handled consistently in such a model, they will have to think of a different model. Early 20th-century positivists like Ernst Mach said that the best model is the most "economical" model, that is the model we can use best in calculations and predictions.

The idea that all physical laws could be useful dates back to Auguste Comte. Comte said that all theories were merely "relatively" true, and that even Isaac Newton's law of universal gravitation was strictly speaking nothing but a social convention – true until new data force us to find a better theory. 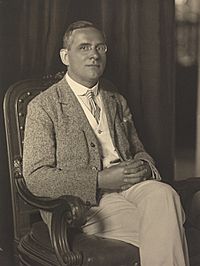 Moritz Schlick, the founding father of logical positivism and the Vienna Circle.

This was an important development in early 20th century Vienna, led by Moritz Schlick and widened by Ludwig Wittgenstein.

This was the idea of P.W. Bridgman, Nobel Prize in Physics for 1946. It was that a concept in science was defined by the way one measured it. If one thinks of electron spin, or the curvature of space, these are not everyday ideas. In everyday life, electrons are not seen, and neither is space seen to be curved. They rest on the results of experiments which measured fundamental properties like time, light, mass, electrical charge, and so on. What Bridgman meant is that their meaning is in the way the measurements were done.

19th-century positivism – or "Comtean positivism" – included the outline of a proposed development. This would lead from primitive explanations, through religious thought and monotheism, to positivism as the universal theory and scientific practice. The theory was very influential among cultural historians. It led Comte to the creation a "religion of humanity" as a secular substitute for all religions. This caused an outcry among scientists, who were ready to adopt the scientific premises but not interested in creating a substitute religion.

One can today still visit temples in Rio de Janeiro, Porto Alegre, and Curitiba in Brazil, and Paris built by 19th-century Comtean positivists. London had a society of positivists. The Turkish leader Mustafa Kemal Atatürk was strongly interested in positivism as the basis of a secularisation of the nation, he was trying to build.

The term positivism is today no longer connected to the construct of a secular religion, but more to describe a scientific method.

All content from Kiddle encyclopedia articles (including the article images and facts) can be freely used under Attribution-ShareAlike license, unless stated otherwise. Cite this article:
Positivism Facts for Kids. Kiddle Encyclopedia.